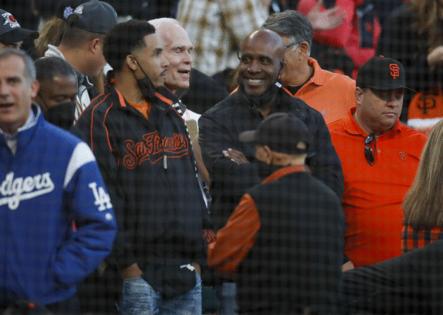 Bonds’ hotly debated candidacy is back on the table this week, a year after coming up short of the necessary 75% in his 10th and final year of eligibility on the writers’ ballot. This time around, it could be already-inducted contemporaries, such as Chipper Jones and Greg Maddux, that decide his fate.

A 16-person Contemporary Era committee — consisting of Jones and Maddux and five other Hall of Fame players, six team executives and three media members/historians — will convene Sunday, the day before the Winter Meetings begin in San Diego, to consider the candidacies of Bonds and seven others, including Steroid Era brethren Roger Clemens and Rafael Palmeiro. Albert Belle, Don Mattingly, Fred McGriff, Dale Murphy and Curt Schilling make up the remainder of the candidates.

Despite amassing a résumé that includes the all-time home run record, seven MVP trophies and 14 All-Star appearances, Bonds’ alleged use of performance-enhancing drugs — which he has never admitted to, nor tested positive for, despite evidence from a federal investigation — tarnished his candidacy in the minds of enough writers to keep him out of the Hall.

Bonds received 66% of the vote in his final year on the ballot, a long climb from the 36.2% he garnered in his first year of eligibility but still short of the required 75%. Election via the committee still demands Bonds reach the 75% threshold but requires only 12 “yes” votes (in 2021, 260 BBWAA members voted in favor of Bonds, but 134 others voted against).

On the panel that will vote Sunday, Bonds can likely count on the support of the two BBWAA representatives, the San Francisco Chronicle’s Susan Slusser and the Minneapolis Star-Tribune’s LaVelle E. Neal III, past presidents of the organization who have both previously voted for Bonds. Hirdt, who was an executive vice president of Elias Sports Bureau before joining Stats Perform, has less of a public record.

“Between (commissioner Bud) Selig, (manager Tony) La Russa, (manager Bobby) Cox, etc., I feel that the Hall of Fame clearly indicated they don’t have a problem with the steroid era,” Slusser wrote in 2021. “So I’m not going to hold it all just on two guys, Bonds and Clemens, which is what I had been doing because of the evidence in their court cases. That to me seems like an unfair way to do things.”

That means Bonds’ fate will be decided by the group of 13 executives and former players, many of whom overlapped with Bonds during his career. He can’t lose more than four votes, and at least three have taken public stances against steroid users.

Of the players, Smith, Trammel and Jones haven’t taken public stances on steroid users. (Smith, though, played with Bonds’ dad, Bobby, in Chicago, and went on to work as a minor-league pitching coach for the Giants.)

Maddux, who faced Bonds more than anyone else in his career (a .262 average and eight home runs in 130 at-bats, but also 23 walks — twice as many as any other hitter), skirted steroid rumors with his slender build and by relying on pinpoint precision over velocity. In a recent podcast appearance, though, he sounded sympathetic to Bonds’ case.

Sandberg has been outspokenly against inducting any player who used. Morris, who was inducted in 2018, said in a 2005 interview that steroid users “lost all credibility, and one of the credentials for the Hall of Fame is integrity, credibility and character.”

Thomas, the other modern slugger, might also be difficult to convince.

In a 2018 interview with the Chicago Sun-Times, Thomas, who hit 521 career home runs, said his career was “stepped on” and that he was “hurt the most” of anyone by the rampant use of PEDs in the 1990s and early 2000s.

“I had an incredible career, and some of the guys on steroids passed me up in one year,” he said. “To dominate for seven straight years like I did, and then overnight go back to 15th in home runs, it’s alarming.”

If Bonds falls short again this year, he could be eligible again in the next cycle of the Contemporary Era committee, which meets every three years. But there is no guarantee: each era ballot is limited to eight players, selected by the committee.