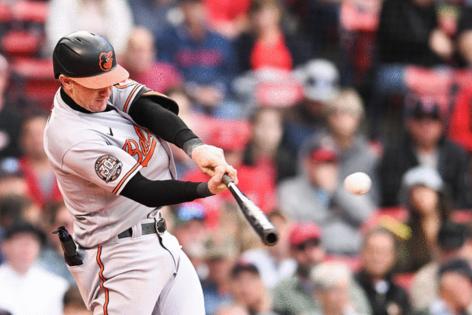 BOSTON — Kyle Stowers threaded the needle earlier this series when asked for his thoughts on his opportunities to face left-handed pitching — or lack thereof. He walked a diplomatic line, acknowledging how the Orioles have ample right-handed hitters who can face southpaws.

“I think it’s less about what I’ve done against lefties in the past and more to do with the guys we have here,” Stowers said.

But even then, the rookie outfielder admitted he always wants to have a chance to prove himself. He did that in the minor leagues, showing he could hit left-handed pitching to the tune of a .982 OPS this season.

Until Thursday, though, manager Brandon Hyde has largely avoided left-on-left matchups for Stowers. Then left-hander Matt Strahm took the mound for the Boston Red Sox in the seventh inning at Fenway Park, and Stowers stayed in the game. He walked to the plate, saw two pitches and then blasted the third — a hanging curveball — deep over the fence.

It was only Stowers’ second plate appearance against a left-hander, and it couldn’t have gone better, tying the game late before Boston’s J.D. Martinez’s two-run homer in the eighth inning secured the Red Sox’s 5-3 victory and series win.

“Great swing on it,” Hyde said. “It’s not that I don’t like him against left, it’s just a lot of times we have guys who are swinging the bat well against left-handed pitchers. Gave him an opportunity there, and he came through.”

The loss, Baltimore’s fifth in six games, lowers its magic number for elimination to two games, with the Seattle Mariners playing Thursday night. The defeat also clinched the Toronto Blue Jays a wild-card spot. The focus, if not expressed outwardly, is shifting more toward next season, with an understanding that the Orioles’ slew of standout rookies will be the ones leading the way.

There was Rutschman recording his 33rd double of the season, passing Cal Ripken Jr. for the most in a season by an Orioles rookie. Gunnar Henderson reached base twice and lashed a double of his own. And then Stowers hit his third homer of the season.

“Cal Ripken, he is the Orioles,” Rutschman said of his achievement. “It’s definitely a cool thing.”

Perhaps the season winding to a close is why Hyde allowed Stowers to face Strahm. Asked earlier this month whether Stowers might see more opportunities against southpaws, Hyde said Stowers would get “plenty of opportunities,” but noted how “if we were 20 games under .500, things might be a little different.”