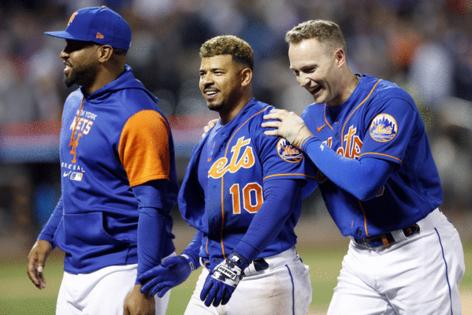 Eduardo Escobar’s RBI single through the left side scored Francisco Lindor, the Mets’ automatic runner at second, to complete New York’s comeback and hand the Marlins their 38th one-run loss of the season — a new franchise record.

This came after the Marlins had a 4-0 lead going into the bottom of the seventh via a Bryan De La Cruz two-run home run in the fourth, JJ Bleday sacrifice fly in the sixth and Brian Anderson RBI double in the seventh.

But then came the Mets — more specifically, then came Escobar, who drove in all five of the Mets’ runs on Wednesday.

Escorbar broke up Miami’s shutout bid when he hit a two-run home run off Jesus Luzardo in the seventh. He then tied the game with a two-run, shift-beating single in the eighth against Richard Bleier, who entered after Tanner Scott loaded the bases on three walks.

And then he won it with his 10th-inning single.

The Marlins close their final road trip of the 2022 season with a four-game series against the Milwaukee Brewers at American Family Field starting on Thursday.