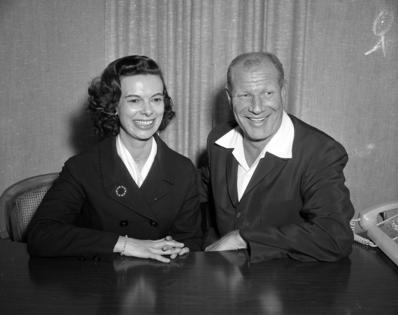 An anti-disco promotion with a local rock station and radio personality Steve Dahl had gone awry, with thousands of fans invading the field and forcing the forfeiture of the second game of a scheduled doubleheader with the Detroit Tigers.

Bill returned to their South Side home in a foul mood.

“Bill was upset at having to forfeit the game,” Mary Frances told the Chicago Tribune in a 1989 interview. “He had never had anything that had ever interfered with the playing of a game, including the midget.”

She was referring, of course, to the famous 1951 stunt in which Veeck signed 3-foot-7 Eddie Gaedel for the St. Louis Browns and sent him to the plate in a game. It was a strange moment that forever would be linked to the baseball maverick, just as Disco Demolition Night would.

“I always had kidded Bill that his epitaph would be about the midget,” Mary Frances said. “That night, before we were going to sleep, I said, ‘Bill, you finally got the midget off your back.’ ”

Bill and Mary Frances Veeck were one of baseball’s most famous couples from their marriage in 1950 to his death at age 71 in 1986. She continued to live in Chicago after Bill’s death, and I interviewed her on occasion for the Tribune on a number of baseball-related topics.

So it was sad to read last week in freelance writer Dave Hoekstra’s blog that Mary Frances died on Sept. 10 at 102.

“Maryfrances’ life has been full,” the Veeck family wrote in a death notice, using the given spelling of her name.

In addition to raising six children, she hosted a radio show with Bill called “Mary Frances and Friend,” wrote a monthly column for four years for Northshore Magazine, served as a Chicago election judge for two-plus decades, taught adults how to read through a program by St. Thomas the Apostle Parish in Hyde Park and helped raise money for the Chicago Theological Union.