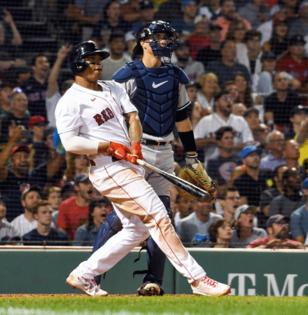 If one were making a guess on whether or not the Red Sox are a playoff team this year solely based on the decibel level of the “Yankees suck” chant on Sunday night, the answer would be unanimous.

Sox fans were as rowdy and confident as ever following a Sox’ 3-0 shutout of the Yankees that was played in 2 hours, 15 minutes, tying the fastest Sox-Yanks game this millennium.

Michael Wacha threw seven dominant innings that were as good as any thrown by a Red Sox pitcher this year.

The Red Sox are back in the playoff race, perhaps?

Entering the off-day on Monday, Baseball-Reference gave them a 4% chance at making the postseason, though the FanGraphs odds were a bit more generous at 17%.

Manager Alex Cora feels differently, largely because he feels like the starting rotation is as rock-solid as it’s been all year.

With Wacha, Nathan Eovaldi, Nick Pivetta, Kutter Crawford and a piggy-back combination of lefty Rich Hill and righty Josh Winckowski, the Sox should at least have a chance on most nights.

“We just have to keep getting better,” Cora said Sunday. “We’re getting healthy, which is important, and it’s important obviously in the rotation.

“You saw Nate, you saw Kutter and Michael, more strikes, less walks. That’s always important. Hopefully this is the beginning of something good but we have to go Tuesday and play the same way.”