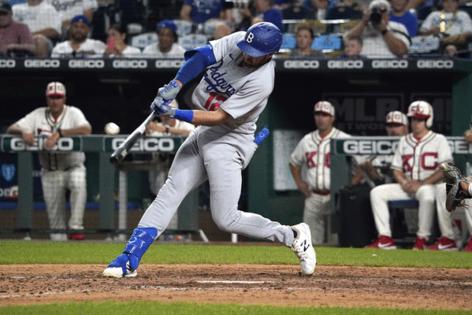 KANSAS CITY, Mo. — Everything about this season so far has pointed to the Los Angeles Dodgers being a special team. Well, the Kansas City Royals got an up-close view of just how overwhelming the Dodgers can be when they’re clicking on all cylinders.

Royals starting pitcher Brad Keller struggled out of the gate as the Dodgers jumped on him for five first-inning runs. The Royals never recovered from the early deficit and fell, 13-3, to the Dodgers in front of an announced 29,689, the largest crowd of the season in KC, for Salute to the Negro Leagues night at Kauffman Stadium.

The Dodgers, who entered the day with the best record in Major League Baseball, clinched the series victory and extended their wining streak to 12 games.

The Royals (47-68) will need to win on Sunday afternoon in order to avoid a three-game sweep.

Both teams wore throwback uniforms in honor of the Negro Leagues as well as the 75th Anniversary of Jackie Robinson breaking the color barrier. The Royals wore 1945 Kansas City Monarchs home uniforms, and the Dodgers wore 1955 Brooklyn Dodgers uniforms.

The game-used jerseys, hats, batting helmets and bases were auctioned off after the game with proceeds going to the Negro Leagues Baseball Museum.

Keller’s night ended after three innings and 74 pitches. He allowed eight earned runs on nine hits, three walks and a wild pitch. Three of the nine hits against him were home runs with Dodgers hitters Mookie Betts, Will Smith and Gavin Lux all getting in on the action.

Keller (6-13) gave up one home run in each of his three innings before he turned it over to Carlos Hernández, who was recalled from Triple-A Omaha prior to the game. Hernández filled Joel Payamps’ roster spot. The Royals placed Payamps on the family medical emergency/bereavement list prior to the game.

Dodgers starting pitcher Andrew Heaney allowed two runs in three innings. He left the game with a left arm contusion after being hit by a comebacker lined back up the middle by Bobby Witt Jr. in the third inning.

Both of Heaney’s runs came on a two-run triple off the left-center field wall by Michael Massey in the second inning.

The Royals finished the game with infielder Nicky Lopez on the mound pitching for the first time in his MLB career. Lopez gave up two runs on a pair of home runs by Joey Gallo and Cody Bellinger in the ninth inning.

Former Royals infielder Hanser Alberto pitched the bottom of the ninth for the Dodgers.