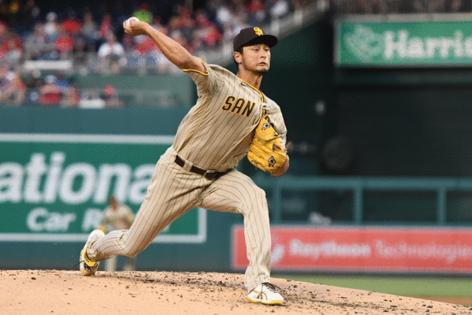 WASHINGTON — Now back to worrying about winning baseball games.

The shock hasn’t necessarily worn off, but baseball comes at its participants fast.

So a day after being rocked by news of Fernando Tatis Jr.’s PED suspension, the Padres continued with the business of their intended march to the postseason.

Saturday’s 4-3 loss to the Nationals, coupled with a Brewers victory over the Cardinals, left the Padres just one game up in the race for the final National League wild-card spot with 46 games remaining.

There can’t be all that many more losses like Saturday’s, especially against a team like the Nationals, who sit a major league-worst 39 games below .500.

After three consecutive victories in which they piled runs on the Giants and Nationals, the Padres on Saturday blew a plethora of chances, twice coming up empty after having the bases loaded with one out and finishing 2 for 12 with runners in scoring position.

The Nationals tied the game 3-3 against Yu Darvish in the sixth. They took the lead in the seventh on a play that initially ended with an out call on a throw from Juan Soto to catcher Austin Nola to get Cesar Hernandez trying to score on a single by Victor Robles. The Nationals challenged both the out call and that Nola did not provide a lane for Robles to slide into home plate

While very few people seem to understand the application of the rule, it did appear that Nola was blocking the plate when Robles began his slide but moved his foot back as Robles got closer to the plate. The instant the home plate umpire Paul Emmel announced the call had been overturned on the basis of Nola having blocked the plate, Padres manager Bob Melvin sprinted from the visitors’ dugout.

Almost as quickly, he was ejected. Melvin continued to make his point with Emmel for a good two minutes, at one point showing the umpire the space Nola provided at the front of the plate.