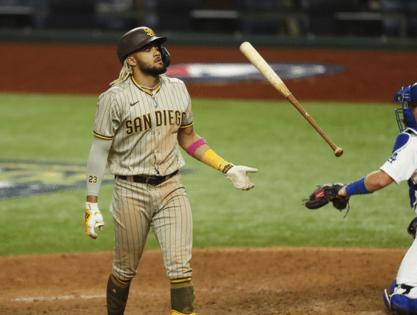 And so we must ask the question first proposed by ABBA: "Can you hear the drums, Fernando?"

Fernando Tatis Jr. can hear the tom-toms, the bass and the snare. He just doesn't listen to them, as he travels recklessly through life to the beat of a different drum — his own, dumb, greedy percussive instrument.

This is a marvelous, remarkably gifted player, all of 23 years old, and widely recognized among the game's greatest athletes.

On the field, he uses a hammer. Off of it, he pulls a screwdriver out of his tool box and uses it on a Padres organization that has awarded him millions — and fans who adore him.

First, there was the offseason motorcycle accident in the Dominican Republic, which resulted in a broken wrist he quietly delayed repairing that has kept him out this season. The hope was he soon could return for the stretch run.

Of course, as we all know by now, Friday he was busted for performance enhancing drugs, which means he will miss another 80 games. This is his fourth year of major league ball, and he has played in 273 games — which are all he's going to play well into next season.

Tatis has admitted his error, but claims he put on a ringworm balm containing the banned substance Clostebol. I seriously doubt it was ringworm, but what the hell.