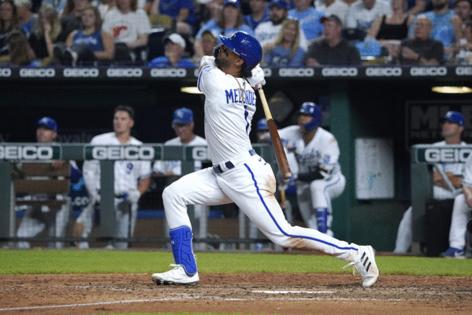 KANSAS CITY, Mo. — Kansas City Royals rookie MJ Melendez stepped into the box against Jake Diekman, a notoriously tough reliever against left-handed hitters, with the score tied in the seventh inning. On a 1-2 pitch, Melendez blasted a go-ahead home run and shouted to his teammates in the home dugout on his way to first base.

Melendez’s 14th home run of the season, which moves him within two of the team lead, put the Royals in front for good on their way to an 8-3 win over the Chicago White Sox in front of an announced 15,463 in the third game of a four-game set at Kauffman Stadium.

The teams will wrap up their series on Thursday afternoon.

With the score tied 3-3 in the seventh, the White Sox turned to Diekman, a recently-acquired left-hander and a former Royal, who’d held lefty batters to a .185 batting average this season. Entering the night, he’d allowed just one homer to a lefty this season.

Melendez had hit two home runs this season against lefties entering the day. Though he’d posted a high batting average against southpaws (.282 compared to .212).

Royals designated hitter Vinnie Pasquantino (2 for 5), Hunter Dozier (2 for 4) and Kyle Isbel (2 for 4, two RBIs) each had multi-hit games.