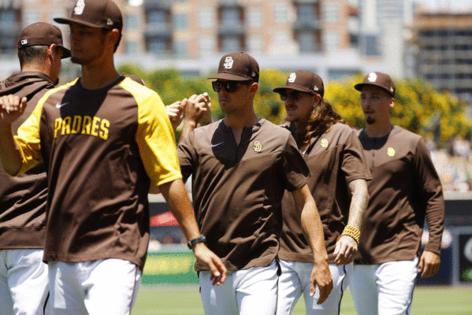 He was the untouchable one, MacKenzie Gore. The left-handed pitcher was long considered the top prospect in the Padres organization. He was off limits, lap after lap — protected in trade chatter like the main vault at Fort Knox.

Gore, at 23, finally seemed to be coming into his own with the team that scooped him up at No. 3 overall in the 2017 draft. He had sidestepped nagging control issues, as well as San Diego's most loathed blister.

In the first nine games of this season, Gore seemed a near-certain contender for NL Rookie of the Year with a 1.50 ERA and 47 strikeouts in 48 innings. This, the Padres thought, was the intersection of patience and production that would make all that time and tinkering worth it.

Later, the velocity began to dip and the wrong numbers began to rise.

No time to panic, manager Bob Melvin said. Surgery would not be needed for what he termed a "low-grade strain" in the elbow. Roots planted in 2022's early days still sowed plenty of promise.

Then came a week ago, on the morning of baseball's trade deadline. Gore came in early before a doubleheader to log rehab work. A clubhouse TV caught his eye. He saw his name.

"It's kind of the same for everybody in here," Gore said Monday in the visiting clubhouse occupied by the Nationals at Wrigley Field. "Shocking."

Players began flying back and forth in what many think is the biggest deadline deal in history.

"I started getting texts, so I texted (President of Baseball Operations) A.J. (Preller)," Gore outlined. "He called me. A.J. felt like he had to make a move to make the team better. He invested a lot of time in me and I cared about him, too.