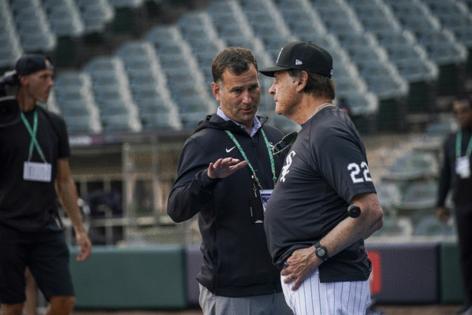 It was back on June 7 that Chicago White Sox general manager Rick Hahn first was asked about the possibility of a summer sell-off.

“I really hope I don’t have to sit here in six weeks and eat these words,” he said. “But I don’t foresee us being in sell mode come the (trade) deadline, even with the (poor) run differential.”

A couple of weeks remain before that deadline, but it appears as though the upcoming stretch of games against American League Central rivals will decide whether Hahn needs to make a tough call on the team’s direction.

Monday’s opener of a three-game series against the division-leading Minnesota Twins kicked off the 15-game, eat-or-not-eat stretch, bringing a renewed sense of urgency to the clubhouse.

“The approach is the same,” manager Tony La Russa said before the game. “We’ve known we’re going to finish the last two weeks (before the All-Star break) in our division, seven games against the first-place team, so we’re excited.

“It’s as close as we’ve been as a unit being competitive. It’s the most fun you can have. And they’re good.”

The Twins are indeed good but far from great.

They came into the series with a 45-37 record, 4½ games ahead of the third-place Sox. But they were 18-21 since May 25, failing to take advantage of the Sox’s mediocrity and put some space between them and their most serious rival.

Still, the Twins swept the Sox in three games in Minnesota in mid-April and can separate themselves by the All-Star break if they continue to have Team La Russa’s number.

And if that happens, Hahn might have to rethink this season and dump some unproductive salaries or soon-to-be free agents and try to regroup for 2023.