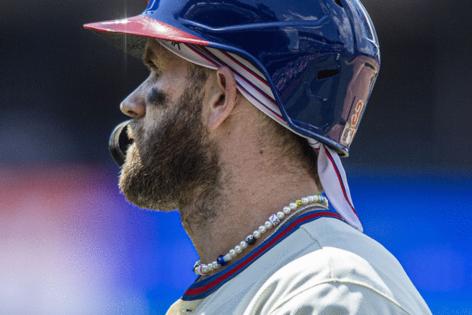 PHILADELPHIA — Bryce Harper’s thumb surgery went as planned and without any complications, a source said Wednesday, and the Phillies star’s expectation of a mid-August return remains possible.

The Phillies provided scant details about the procedure, including what it entailed, which doctor performed it and where it took place. Interim manager Rob Thomson said only that it “went very well and we expect him to be back at the end of the year.”

Harper is expected to discuss the surgery and the recovery timeline when he rejoins the Phillies later this week.

The post-surgery optimism is consistent with what a source characterized Monday as Harper’s pre-op outlook on a six- to eight-week recovery from the fractured left thumb. Without specifics of the surgery, it’s impossible for independent experts to weigh in on whether that’s realistic.

David C. Hay, an orthopedic hand and wrist surgeon at Cedars Sinai Kerlan-Jobe Institute in Los Angeles, said this week that it wouldn’t be uncommon for an athlete with a minimally displaced fracture to have a screw inserted into the thumb to hold the bones in place and expedite the rehab process.

”Once you put the hardware in, then you can start some [range of] motion,” said Hay, who hasn’t treated Harper. “With hardware, in three or four weeks, you’re starting to get enough healing that, if you can protect the thumb externally a little bit — a brace or tape, or something — that’s where you land in that four- to six-week recovery. Unless it’s more complicated, [returning] within that six-ish-week time frame is pretty reasonable.”

If Harper returns six weeks from Friday, the Phillies would have 50 games remaining. If he’s back in eight weeks, he could play in the final 36 games.

Harper was injured Saturday night in San Diego when he got hit on the thumb by a 97-mph fastball from Padres lefty Blake Snell.