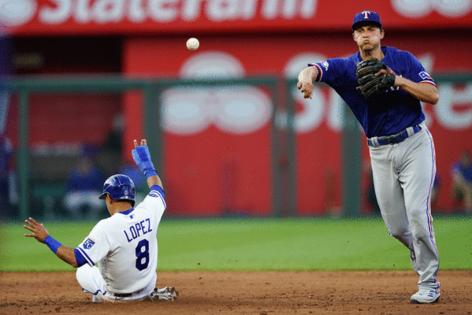 KANSAS CITY, Mo. — Vinnie Pasquantino will have to wait at least another day to get his first major-league hit. And the Kansas City Royals will need an additional sunrise before getting the chance to end their latest losing streak.

Pasquantino went 0 for 4 in his MLB debut on Tuesday night, while the Royals pitchers were ineffective from the start in a 8-3 loss to the Texas Rangers at Kauffman Stadium.

KC has now lost four straight and will try to avoid a three-game sweep against Texas in an afternoon game Wednesday.

The Royals’ day began with buzz even if it ended with a thud.

Pasquantino was announced Tuesday morning as a starter, batting sixth as the Royals’ designated hitter. The 24-year-old, who’d been called up from Triple-A Omaha the previous day, batted .280 with 18 home runs and 67 RBIs in 69 games with the Storm Chasers, adding 37 walks compared to 36 strikeouts.

His arrival — he ranks as a top-100 prospect at both FanGraphs and MLB Pipeline — literally drew a crowd Tuesday night. The Royals drew 19,593 fans on a weeknight game, and that included roughly 3,500 walk-up tickets, which the team reported as about twice the normal amount.

Those spectators weren’t treated to much of a game. KC starter Jonathan Heasley was hit hard from the start, with the most damage coming on a Marcus Semien three-run home run that made it 4-0 in the third; Semien picked on a 2-2 changeup after Heasley threw it five different times to him in the same plate appearance.

Pasquantino, meanwhile, wasn’t able to break through in his first start. He received a standing ovation before his first at-bat in the second, and on the first pitch, he bounced a 106-mph grounder up the middle at Semien, resulting in a 4-6-3 double play.

Later, Pasquantino grounded out to shortstop in the fourth, popped out to center in the seventh and flied out to left in the ninth to end the game.

KC (26-47) has now had seven separate losing streaks of at least four games this season.

PHILADELPHIA — The Phillies won their 60th game of the season on Sunday, and their fifth game in a row, and they did it with ease. In a 13-1 win over the Washington Nationals, to complete a four-game sweep, the Phillies ...Read More

KANSAS CITY, Mo. — The youth-infused Kansas City Royals started their 11-game homestand by taking three of four against the Boston Red Sox, a club that just traded for former Royals star Eric Hosmer a few days ago and ...Read More

BALTIMORE — When Brandon Hyde whipped the hat off his head, it was almost as if he needed to let the steam out more easily. The Orioles manager had been standing on the top step of the dugout, waiting for a verdict on a ...Read More