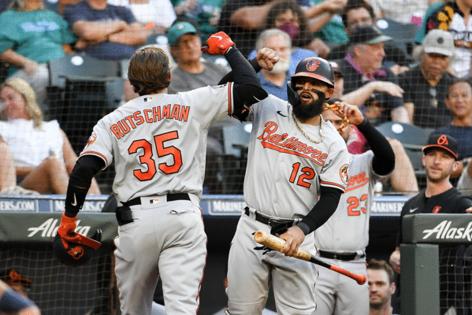 Especially for the Mariners’ bats, which barely made a peep as they were held to just three hits in a desultory 9-2 loss to Baltimore in front of 21,615 at T-Mobile Park.

While Seattle’s offense was just about nonexistent, the O’s were as hot as the Seattle weather, smashing five home runs.

It was the Mariners’ second consecutive loss following a five-game winning streak, dropping them to 34-41 while the Orioles — who went 52-110 a year ago — improved to 35-40.

For a little while, it looked like the Mariners might be in danger of being no-hit by the Orioles for the second straight game at T-Mobile,

The last time Baltimore had been in Seattle, May 5, 2021, John Means threw a no-hitter.

On Monday, Baltimore’s Tyler Wells, a 6-foot-8 right-hander who was a reliever a year ago and making just the 15th start of his career, retired the first 14 batters before Cal Raleigh broke up the perfect game with a solo homer to right field with two outs in the fifth on a full count.

According to StatsbySTATS, before Raleigh’s HR, the Orioles had faced 43 straight batters at T-Mobile without allowing a hit, walk or hit by pitch, the longest streak for any team at any ballpark in the past 40 years.

The Mariners were already down 7-0 when Raleigh went deep, and his home run proved to be a brief but ultimately futile glimmer of hope in a game that got away from them quickly.

Mariners rookie George Kirby allowed seven runs and four home runs in just four innings in what was the worst outing of his career, and the Orioles added another home run in the sixth in winning for the eighth time in their past 11 games.