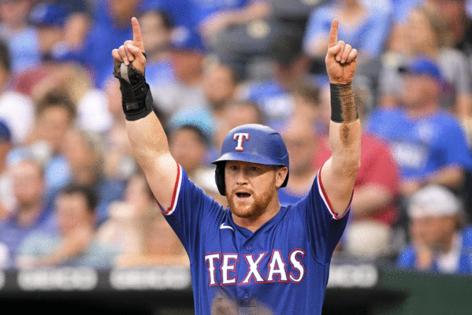 Bubic had allowed five runs over 11 1/3 innings combined against the Angels and Giants, a marked improvement from earlier in the season when he was sent to Triple-A Omaha.

But things unraveled in a hurry Monday night for Bubic in his 50th career appearance. He allowed seven runs (five earned) and nine hits in 4 2/3 innings as Texas beat the Royals 10-4 at Kauffman Stadium.

Bubic walked three, had two wild pitches and hit a batter as his baffling struggles at home continued.

In 10 starts at Kauffman Stadium this season, Bubic has given up 24 runs in 24 1/3 innings. He hasn’t won a start at home since Sept. 18 against the Seattle Mariners.

After the Royals scored a run in the first inning, Texas countered with four in the second. The Rangers loaded the bases on a single, walk and an error by shortstop Bobby Witt Jr. to start things.

Nathaniel Lowe walked to force in a run and Leody Tavares delivered a two-run single. An infield out produced a run that made it 4-1.

The Royals pushed three runs across in their half of the frame on a two-run double by Whit Merrifield and an RBI single from Andrew Benintendi.

Bubic allowed a run in the fourth inning, then served up a two-run homer to Mitch Garver as the Rangers took a 7-4 lead. Texas added three in the sixth inning against reliever Matt Peacock.

One bright spot on the night was right-hander Jackson Kowar, who was recalled from Triple-A Omaha on Monday.

Reaching 98 mph with his fastball, Kowar got the Rangers to swing and miss 10 of his 62 pitches. He threw 40 strikes. Thirty-two of his pitches were change-ups.

Center fielder Michael A. Taylor walked twice and had a single in two at-bats as he’s continued a nice home stand.