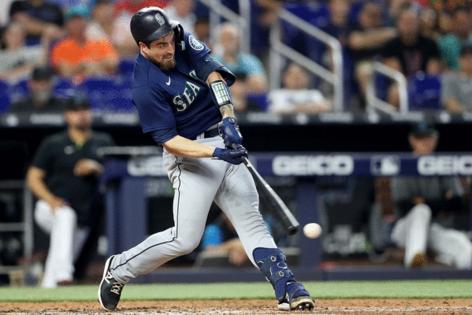 OAKLAND, Calif. — When rest, rehab, a platelet-rich plasma injection and everything else he tried didn’t get his damaged left shoulder strong enough to return to the field, Tom Murphy was left with no other choice but the last option he wanted — surgery.

Before Thursday’s game, manager Scott Servais announced that the veteran catcher has decided to undergo season-ending surgery to repair damage from tearing in the rotator cuff and labrum of his left shoulder.

Murphy has been dealing with the left shoulder problems for the past few seasons. He’s had the shoulder dislocate either completely or partially a handful of times over the last season.

The most recent dislocation came on May 6 while trying to tag a runner at the plate at T-Mobile Park. Murphy walked off the field immediately after the play, cradling his arm.

An initial attempt at comeback a few weeks later ended when he felt some discomfort while hitting off the tee.

“He tried to everything he could to get back,” Servais said. “He did a number of different treatments to try to get it back and going. It just wasn’t taking. It was time for him to shut it down, which is hard for him.”

After riding the shuttle from Class AAA to the big leagues with the Rockies for several years, Murphy seemed to have found a permanent big-league home when the Mariners acquired him just before the 2019 season.

Splitting time with Omar Narvaez in a platoon role, Murphy had a breakout season, posting a .273/.324/.535 slash line with 12 doubles, a triple, 18 homers and 30 RBI in 75 games. The Mariners decided to trade Narvaez after the 2019 season and went into 2020 with Murphy expected to be the primary catcher.

However, a pair of foul tips off his left foot during the “summer camp” leading to the COVID-shortened season resulted in a weird fracture that wouldn’t seem to heal properly. He missed the entire 60 games of 2020. The time away and discomfort in both shoulders led to an early season slump that he spent the season trying recover from at the plate. A return to more of a platoon role and his ability to work with the starting pitching staff helped him rebound slightly at the end of the season.

“It’s hard for him and It’s hard for us,” Servais said. “He means a lot to our team and what he does behind the scenes, even when he’s not playing to help our pitchers and catchers out. The biggest thing is he’s got to get healthy and we’ll get him back after that.”

Servais believes that Murphy will be ready to go for next season.

“If there’s anybody who’s gonna come back from this, it’s going to be Murph,” Servais said. “He works so hard, staying in shape and everything he does with his body to get back on the field. So again, it won’t be this year. But he’ll be back.”

The loss of Murphy has been offset by the outstanding play of Cal Raleigh. The switch-hitting catcher, who split time with Murphy last season, has played his way into more of the primary catching role.

After playing in the first two games of the series, Raleigh was out of the lineup for the early afternoon game on Thursday.

“We need to give him days off and it’s hard when he’s playing as well as he is, not just at the plate but behind the plate,” Servais said.