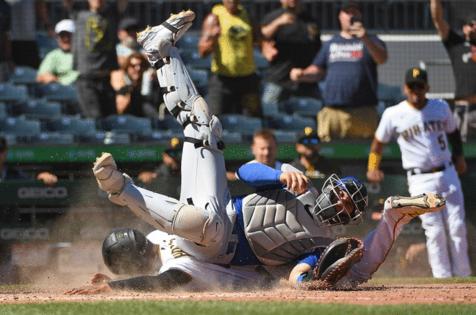 One that came with a scare at the end, as the Pirates celebrated an 8-7, 10-inning victory over the Cubs in muted fashion.

After Chavis’ bloop hit fell and Ke’Bryan Hayes slid into home plate, the Pirates third baseman was clearly uncomfortable — though he was called safe. Music played for a second, then was cut. Teammates and team staffers rushed onto the field to check on Hayes, who was eventually helped off the field.

The bigger issue, of course, is Hayes. But it is a big win for the Pirates, one that helps them take three of four in this series.

Some fine Pirates defense kept the Cubs scoreless in the top of the 10th inning, as Chavis threw home to Tyler Heineman, who tagged out third baseman Patrick Wisdom, a play that was challenged and ultimately upheld.

Just when it looked like the Pirates might cruise to an easy victory, a bumpy eighth inning disrupted those plans. With the Cubs facing a 6-2 deficit to start, Wisdom singled through the right side off Wil Crowe to bring home Chicago’s first run.

Crowe had pitched the inning before, and when he walked second baseman Jonathan Villar — the 10th plate appearance of Crowe’s outing — manager Derek Shelton turned to another reliever, although the one he chose was surprising.

Right-hander Yerry De Los Santos has pitched well but had just eight career MLB appearances before Thursday. Shelton had gone to David Bednar in similar situations before but chose not to on Thursday.

Nevertheless, De Los Santos was in the thick of things when he entered the game — and did not fare terribly well. The first batter De Los Santos faced was shortstop Nico Hoerner, who drilled an elevated slider back up the middle, scoring two to make it a 6-5 game.

A walk to pinch-hitter Rafael Ortega followed before De Los Santos gave up another single, this one coming on a well-placed, 0-2 slider to pinch-hitter Alfonso Rivas, who shot the ball back up the middle past a diving Diego Castillo.

WASHINGTON — For the first time in more than a month, the Miami Marlins had both Brian Anderson and Joey Wendle in their starting lineup.

They immediately felt the impact.

PHILADELPHIA — Chalk one up for the Phillies’ farm system.

For good reason, there aren’t two more frequently criticized areas of the organization over the last several years. Yet here they were ...Read More