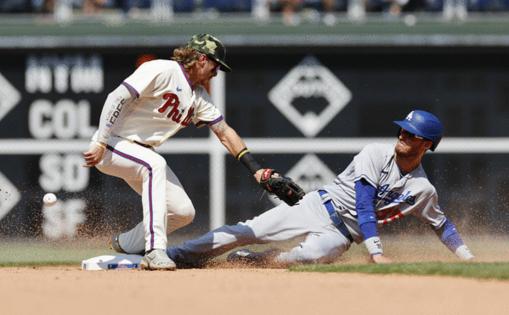 PHILADELPHIA — doPhillies starter Zach Eflin watched along on the clubhouse TV as Alec Bohm stepped up to the plate in the bottom of the tenth inning. His team was trailing the Dodgers 3-2, with two outs, a runner on second, and the game on the line. Since the eighth inning, Eflin had been using his ears to get a sense of what was about to transpire. The broadcast was about 15-20 seconds behind, but if he heard cheering, he knew that something was about to happen. He just didn’t know what.

Bohm took five pitches. On the sixth pitch, he hit a ball softly to Dodgers second baseman Max Muncy. It seemed like a routine play, but then, Eflin heard the cheers. Muncy fumbled the ball. Roman Quinn — who is one of the fastest baserunners in baseball and perhaps the only person who could have scored in this scenario — began chugging towards home plate. Muncy tried to throw it home, but to no avail. Quinn was safe, and the Phillies won, 4-3, on a walkoff error.

It was an imperfect ending to an imperfect homestand. After Eflin tossed one of the best starts of his career, holding the Dodgers to four hits, two earned runs, two walks, two home runs and striking out a career-high 12 batters, the Phillies bats remained quiet until the sixth inning, when eight-hole hitter Garrett Stubbs hit his first career home run. In the bottom of the seventh, Kyle Schwarber had a chance to give his team the lead and struck out with a runner on first and one out.

In the bottom of the eighth, Rhys Hoskins hit a liner to third base, with the bases loaded. He hustled down the line as fast as he could, but he wasn’t fast enough. He end up grounding into a double play to end the inning. After sliding into first, Hoskins knelt on the bag for a few seconds, and slammed his helmet onto the dirt in frustration. When he reached the dugout, he picked up a trash can and slammed it against a bench.

Jean Segura sent the game into the extra innings by hitting an RBI single in the ninth inning, but then J.T. Realmuto made a costly base running error in the tenth, running towards home plate after reaching third base safely. Realmuto misread the situation — Justin Turner made it seem like the ball was thrown over his head — but it was a costly mistake, from one of the Phillies’ best baserunners. Johan Camargo struck out in the next at-bat.

With Quinn — who entered the game batting .111 for this homestand — at the plate with two outs, it seemed like the game was over. But he reached second on a line drive single to right field, which brought Bohm to the plate, and soon after that, the sound of cheers to Eflin’s ears.

This was not the homestand the Phillies had hoped for. After their offense clobbered opposing pitching in Seattle and Los Angeles, they went 2-4 at home, and scored only 12 runs through six games. But regardless, their win on Sunday did show grit, which is something the Phillies have lacked in previous years.

Eflin with a stellar outing against a tough lineup

Despite the two solo home runs, this very well could have been one of the best outings of Eflin’s career. His 12 strikeouts were the most any pitcher had thrown against the Dodgers since Justin Verlander struck out 13 in August of 2018. Eflin is one of just two pitchers this season who have pitched seven innings, struck out 12 and allowed two runs or fewer this season (the other, by the way, is Clayton Kershaw).

This upcoming road trip could not come at a better time

The Phillies play in Atlanta on Monday for a four-game series and will head to New York next weekend for a three-game set. For whatever reason, they’re hitting much better on the road than they are at home. Their on-base percentage at home is .297, which ranks 25th in MLB. Through 24 games, they’re slashing .239/.297/.372 at home. On the road, they’re batting .261, the second best team batting average in baseball. They have an MLB-leading .465 slugging percentage and an MLB-leading .791 OPS on the road.

If they’re going to contend, they’re going to have to figure out how to hit at Citizens Bank Park. But with a 19-22 record, they are in desperate need of wins, which this upcoming road trip could provide.