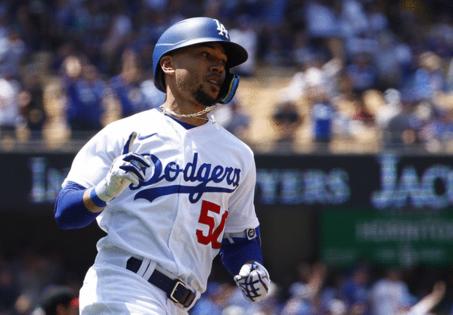 He met third base coach Dino Ebel with a smooth low-five. He finished his trot around the bases with a passionate two-handed exchange with Hanser Alberto at home plate.

In the Dodgers’ 7-6 win over the Arizona Diamondbacks on Tuesday afternoon, Betts had just lifted a two-run home run to left field, the first of three long balls the Dodgers hit during a go-ahead, five-run rally in the sixth inning.

As he has done much more during his resurgent start to this season, Betts completed each step of the ensuing celebration with a wide, stress-free smile on his face.

The former MVP certainly did that in the first game of a doubleheader Tuesday.

Betts led off the first inning by smoking a single to left field, the ball jumping off his bat at almost 106 mph.

Following a third-inning strikeout, in which he took a called third strike on the outside edge, he responded with a thunderous first-pitch swing in the sixth, cracking his eighth home run of the season and sixth in the last 15 games a projected 391 feet to tie the score at 3.

After Trea Turner and Justin Turner put the Dodgers in front later in the sixth with a solo and two-run home run, respectively, Betts also scored what proved to be the deciding run in the seventh, lining a double to left before coming home on Freddie Freeman’s RBI single.

“I’m having a lot of fun playing,” said Betts, who raised his batting average to .269 and on-base-plus-slugging percentage to .846 following his first three-hit performance of the season. “Just trying to look at things from a different lens and trying to enjoy each and every day. It seems to be kind of giving me relief and taking some pressure off myself. Just enjoying being here.”