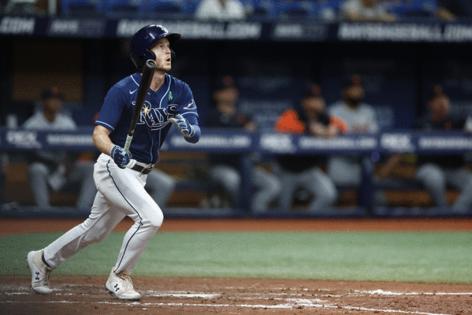 And that’s pretty much what they got in scoring their most runs in a week-and-a-half, beating the Tigers 8-1.

Kevin Kiermaier had a home run and an RBI single. Brett Phillips homered, and for the second straight night. Randy Arozarena homered to complete the outfield trio after earlier scoring one run and knocking in another. Ji-Man Choi singled in two runs. Harold Ramirez had a hand in two.

Top starter Shane McClanahan made it all stand up with another sterling outing, allowing the one run over seven innings, striking out seven.

McClanahan retired the first nine Tigers and looked dominant in doing so.

The first hit was Robbie Grossman’s slow roller to the rightside leading off the fourth that beat the shift. The first loud hit was a homer by Jeimer Candelario on the first pitch of the fifth.

For the night, McClanahan allowed just four hits and no walks, extending his American League-leading strikeout total to 65.

The Rays grabbed the lead from the start as Yandy Diaz led off with a single and came around to score on Choi’s fielder’s choice grounder. They made it 2-0 when Kiermaier led off the second with a homer, his fourth. They added one in the fourth, then three in the third, starting with Phillips’ fourth homer of the season.

They also played some good defense, headlined by a running and diving catch in left by Arozarena,

Cash, who rarely says anything negative about his players, made clear after Monday’s loss that he expects more out of the offense, even with Brandon Lowe joining Manuel Margot on the injured list.

“We’ve got to do a little bit more offensively early in the ballgame,” he said following Monday’s 3-2 loss. “We’re just not getting it done to the point that we’re capable of. I know we’re banged up, but we’ve still got plenty of guys that are more than capable of putting a little bit more pressure on pitchers, and we didn’t do that (Monday).”

Cash then said Tuesday ahead of the game that it would take a group effort to get out of it.

“I think everybody’s got to kind of do their part a little bit,” he said. “And that’s generally what it takes. It wouldn’t be fair to put it on one guy. We’re fully capable of turning it around. And we could do it (Tuesday). I hope they do.”