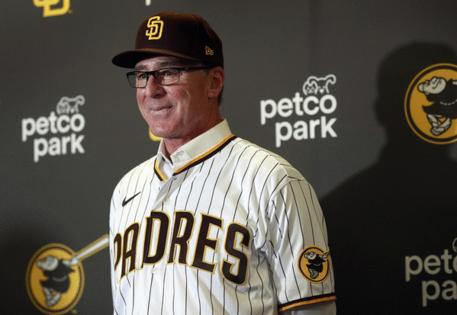 Choosing to join the Padres five weeks ago, Melvin moved on from an Oakland A's team preparing to rebuild and joined a National League West competition that almost certainly won't raise the bar as high as it did last year.

It's easy to forget that the 2021 Padres, even if they'd played a lot better, had no chance to challenge for the NL West crown.

That's because the Giants and the Dodgers, in an unprecedented show of force within a division race, combined for 213 victories.

It was nuts. While the Giants were winning 107 games to break their franchise record — set in 1904, when Teddy Roosevelt won the U.S. presidential election — the Dodgers were marching toward 106 victories.

Chances of 213 wins from the Dodgers and Giants next year?

Somewhere near the odds that MLB's next labor deal lowers ticket prices and mandates afternoon games in the World Series.

Statistical regression is the new best friend to Melvin and the Padres, meaning the Dodgers and Giants are likely to fall back below triple digits.

Already, the Giants are faced with replacing massive production of two players who moved on in recent days.