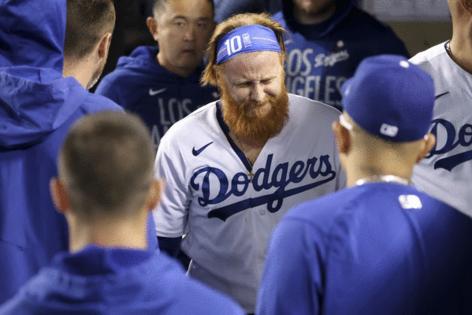 Their sparkplug third baseman pulled up suddenly while running out a ground ball in the seventh inning against Atlanta on Wednesday and grabbed the back of his left leg, the classic sign of a hamstring injury. He walked slowly toward the dugout, clearly in pain, descending the steps with aid from teammate AJ Pollock.

To navigate the final stairs from the dugout to the Dodgers' clubhouse he needed help from Albert Pujols, who wrapped his muscular left arm under Turner's left arm while Turner clutched the railing for additional support.

Those moments symbolized who and what the Dodgers are now, one win and three losses into their National League Championship Series against the Braves: they're depleted, more than a little broken and facing the point of no return after a dispiriting 9-2 loss at Dodger Stadium left them one defeat from the end of their reign as World Series champions. Their season could end on Thursday, in Game 5 at Dodger Stadium.

Manager Dave Roberts said early indications were that Turner's injury is Grade 2 in severity. "I think that will be it for him," Roberts said. The Dodgers know and share Turner's pain.

They came into this series without pitcher Clayton Kershaw or first baseman Max Muncy because of injuries. Now, they're hoping starter Max Scherzer has recovered from the "dead arm" he experienced in their Game 2 loss to the Braves after being used in relief to save Game 5 against the San Francisco Giants in the NL Division Series.

Roberts also insisted that Julio Urías, who was stretched by pitching in relief in Game 2 against Atlanta, showed no signs of fatigue Wednesday in a start that lasted five innings and that the Braves merely "had a very good game plan for him." If that's all the problem was, there's hope. If he truly was fatigued, the Dodgers are done.

Thursday's game will be a bullpen game for the Dodgers, and while their deep bullpen usually makes it easy for them to win those pieced-together games, it's fair to wonder how much they have left — and if what they have left is enough to defeat the Braves three times.

A season that was distinguished by 106 regular-season wins, a victory over St. Louis in the wild-card game, two comebacks against the Giants in the NLDS and a stirring rally to win Game 3 against Atlanta rides on how well the Dodgers can pull themselves together physically and emotionally against Braves starter Max Fried.

Unfortunately for the Dodgers, just as they're falling apart the Braves are coming together. The Braves didn't let the disappointment of their Game 3 loss carry over into Game 4. This time, when they went up 5-0 and the Dodgers came back to score twice in the fifth, the Braves padded their lead, adding four runs in the ninth to put the game out of reach.

If baseball’s winter meetings were being held this week as scheduled, former Orioles manager Buck Showalter would have likely been in Orlando, Florida, with the rest of the baseball world as part of a television team —...Read More

That was also the last time the Mets had an outfielder (Carlos Beltran) post 5.5 Wins Above Replacement, according to FanGraphs.

The last time the ...Read More