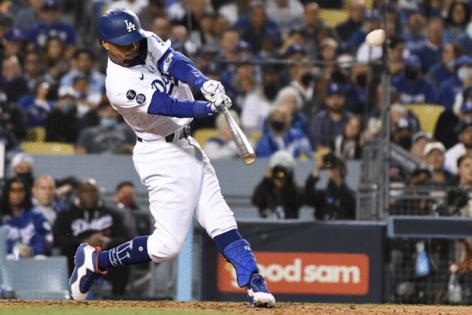 LOS ANGELES — A night after they whimpered, they wailed.

A game after being blown to the brink of elimination, they gusted and swirled and whipped.

C'mon, you really thought the Dodgers were going away quietly? You really thought baseball's resilient defending champions were just going to lay down and let those maddening San Francisco Giants celebrate in their backyard?

After waiting 131 years to meet their ancient rivals in a playoff series, the Dodgers were going to make damn sure this one went the distance.

Needing a win, the Dodgers delivered a whopper, defeating the Giants, 7-2, Tuesday at Dodger Stadium to even the five-game National League Division Series at two games apiece and send it to decisive Game 5 on Thursday night at San Francisco's Oracle Park.

You read that right. A decisive Game 5. A span of three centuries boiled down to one night, one winner, one loser, one with eternal bragging rights, one in historical despair.

The Dodgers and Giants have played 2,539 games in their long history, yet none like that one that comes next.

"This is what baseball wants," said Dodgers manager Dave Roberts. "If you have a pulse or are a sports fan, you better be watching Dodgers-Giants."

"I'm sure it will be a lively atmosphere," said Giants manager Gabe Kapler in the biggest understatement in the last 131 years.