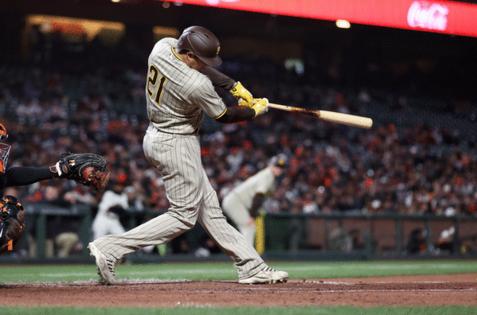 Manny Machado has been playing hurt most of the season.

Lately, he has also been taking groundballs and batting practice every day.

This is significant for two reasons.

First, Machado has frequently skipped on-field BP and/or pregame fielding drills this year in favor of rest and treatment for a left shoulder injury that has bothered him since April. Neither Machado nor anyone else will specify the injury, but it has required extra care to allow him to continue playing, and multiple people in the Padres organization have said the injury is significant enough to have affected his power numbers.

Yet he has started 133 games, tied with Jake Cronenworth for most on the team, and is still playing at a high level in the field. He is the only Padres player to have started each of the team's past 65 games. Everything he has done to keep his body as healthy as possible has been so he could be in the lineup at this point in the season.

"I'm trying to win," Machado said Tuesday when asked about playing hurt. "That's what they pay me for."

That has not changed even as the Padres have stopped winning.

Which brings us to the second reason his participation in pregame activities is noteworthy.

Machado essentially stopped taking batting practice toward the end of 2019, a season in which his performance dropped off precipitously and when, he has privately acknowledged, his effort waned as it became clear around that year's trade deadline that the Padres were not truly invested in winning.

He wasn't the only one. He was just the most important.