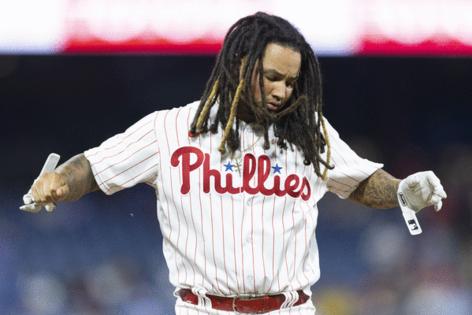 With the punchless Phillies desperate for quality starts, especially from their top three pitchers, Gibson turned in a quintessentially Jekyll-and-Hyde performance in a 6-3 loss to the Chicago Cubs, another team that’s playing out the string after strip-mining its roster at the trade deadline.

Gibson plowed through the Cubs’ batting order for four innings before giving up a single and back-to-back home runs to begin the fifth. Patrick Wisdom’s go-ahead two-run shot, which preceded Alfonso Rivas’ solo number, came on a 2-2 pitch and was the 70th allowed by the Phillies in a two-strike count, sixth-most in baseball.

The Phillies backslid to .500 — they are 72-72 — for the 25th time this season. They remained 4 1/2 games behind the Atlanta Braves in the National League East but were in danger of sliding to three games behind the St. Louis Cardinals in the wild-card race.

Regardless, playoff-race fever isn’t exactly gripping Philadelphia. The announced crowd of 16,170 was the smallest home crowd since June 10 and seventh-smallest in 47 games since Citizens Bank Park reopened to full capacity on June 4.

The Phillies were held to six hits, and save for a sixth-inning spurt, didn’t muster much offense against five Cubs pitchers. Back-to-back doubles by Jean Segura and Bryce Harper and an RBI single by Didi Gregorius led to two runs and cut the deficit to 4-3.

But the Cubs scored twice in the seventh inning against reliever Sam Coonrod to stretch the lead back to 6-3.

Gibson retired the first 12 Cubs batters, including five in a row and seven overall by strikeout. But he allowed a leadoff single to Willson Contreras and didn’t locate his fastball to Wisdom or Rivas.

The Twins starting pitcher, who struck out five batters and allowed just one run in five ...Read More