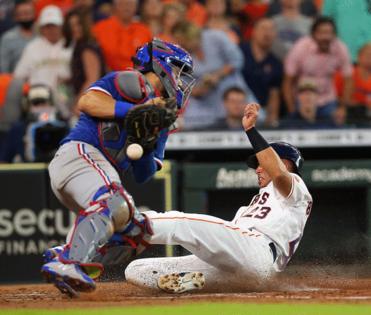 The Rangers, who lost to the Houston Astros, 4-1, at Minute Maid Park, were held hitless until Isiah Kiner-Falefa’s shallow fly dropped in right-center in the eighth inning. Andy Ibanez’s solo homer in the ninth prevented the shutout.

Kyle Gibson walked a career-high eight batters and took the loss despite grunting his way through six innings. Only two of the three runs he allowed were earned.

The losing streak, however, reached 11 games, the third-longest in club history. The Rangers’ longest losing streak was 15 consecutive losses in 1972, the team’s first year in Arlington. Texas has not even led a game at any point during the 11-game stretch, a span of 95 innings.

The 2021 Rangers dropped to 35-64 and are 25 games behind the first-place Astros. The current stretch started with two losses to Oakland before the All-Star break. Since the break, the Rangers have lost nine consecutive games. They’ve been outscored 65-14 in the past nine games.

The Rangers have two losing streaks of nine games or more for the first time in team history.