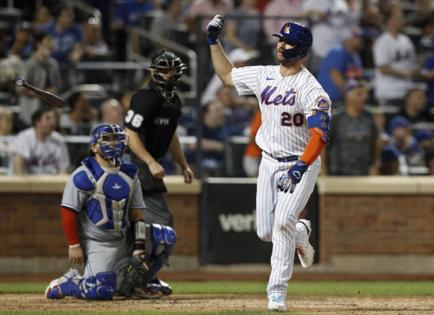 NEW YORK — If the old saying is true, and pitching and defense really do win championships, then the Mets looked like a World Series team on Friday night.

The Mets beat the Blue Jays, 3-0, behind six scoreless innings from their starting pitcher, a bevy of beautiful plays in the field and two no-doubt home runs from Pete Alonso. Tylor Megill, the unheralded rookie, turned in his second straight start of six frames and no damage, holding the high-flying Blue Jays’ offense to just two singles and a walk. Alonso’s two-run bullet into the left-field seats was double the amount of runs the Mets would end up needing. And even though Toronto pitcher Steven Matz fared well in his return to Citi Field, his offense didn’t pull its weight.

The bottom of the first followed an ideal script for the Mets. Brandon Nimmo drew a leadoff walk and Alonso, forced into the two hole since Francisco Lindor’s injury, let him keep walking all the way home. Matz’s 1-1 pitch stayed up in the zone and Alonso banished it 406 feet in the other direction. The pull-side home run makes Alonso the first Met to reach 20 on the season and also gave the Mets their 17th homer in their last six games.

Megill acclimated nicely to his 2-0 lead. After Cavan Biggio knuckled a single into shallow right field in the second inning, Megill retired nine Blue Jays in a row. He finished his night with a four-pitch inning, retiring Toronto’s trio of talented All-Star infielders easily. None of those players — Marcus Semien, Bo Bichette or Vladimir Guerrero Jr. ㅡ hit safely against Megill. The 6-foot-7 pitcher finished his evening with five strikeouts and lowered his ERA to 2.10 in the process.

While the eventual returns of Jacob deGrom and David Peterson — as well as the impending arrivals of the rehabbing Carlos Carrasco and newcomer Rich Hill — could push Megill out of the rotation, he’s been a godsend for the Mets in the interim. Whether he finds a place on the team as they get deeper into this pennant run, Megill has certainly earned the respect of the Mets’ clubhouse.

He was buoyed all night by the Mets’ ironclad defense. Right fielder Randal Grihuck tapped a ball toward the hole between shortstop and third base on the first pitch of the fifth inning. J.D. Davis ranged deep to his left, stabbed the ball and pinwheeled his body into throwing position, making a spot on throw to get Grichuk by a few steps.

Megill got some more help in the sixth when Bichette also went after a first pitch. The big swing resulted in a little fly ball that was dropping quickly in front of Michael Conforto. The Mets’ right fielder set out on a perfect route to the ball, laying out to use every centimeter of his body in making the catch.

The home team was mostly shut down at the plate aside from Alonso’s early liftoff. Megill did get his first MLB hit, shooting a fastball into right field for an opposite field single. Matz looked comfortable in his old ballpark though, scattering four hits in 5 2/3 innings and not allowing any runs after Alonso took him deep.

The lead went to 3-0 when the Polar Bear cracked a solo homer in the eighth off of Ryan Borucki. The late-inning laser went even further than the first one, settling 450 feet away in the second deck.

Edwin Diaz got out of his funk in the ninth inning with a much-needed clean save. Diaz had blown a lead in each of his last three appearances but got the Jays in order to seal this one, making George Springer swing through a pitch for the final out.

The Mets could not have asked for a better start to their 11-game homestand, and with a front office strategy that hints at an active deadline, things could get even rosier in Queens.

Inspiration? Never had it.

Season? About to lose it.

One night after one of the most emotional comeback playoff victories in franchise history, the Dodgers inexplicably strolled into Chavez...Read More

When he watched Gavin Lux, an infielder-turned-outfielder for all of six weeks, fail to catch ...Read More

He used to turn moments like these into memories.

Justin Turner didn’t spread his arms and fly around the bases on this Wednesday night. His first name wasn’t chanted ...Read More

LOS ANGELES – The Braves have shown their resilience time and again throughout the 2021 season. They provided another reminder of their mental fortitude Wednesday in Southern California, and they’re one win from a ...Read More

BOSTON — What a difference 24 hours can make in October baseball.

Not long ago, it felt like the Red Sox were within touching distance of a fifth World Series appearance this century. Now it seems Boston has too long a ...Read More