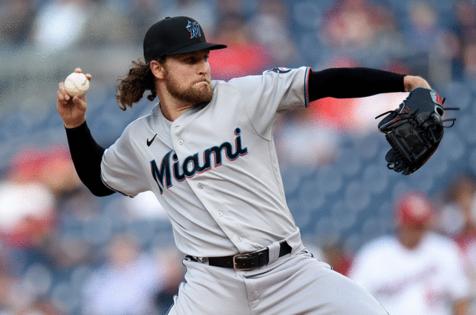 WASHINGTON — Nick Neidert started to bound away from field and back to the Miami Marlins’ dugout while the final two outs in the top of the fifth inning were recorded. He peeked back over his shoulder just to make sure it was clean and it was. His third double play of the night quieted another potential Washington Nationals rally and sent Neidert back to the clubhouse after the best start of his young career.

The 24-year-old rookie went five full innings for the first time, and, for the third time, completed a start with only one earned run and he did it against one of the hottest lineups in baseball. He got Juan Soto to ground into a double play to end the third. He struck out Josh Bell to end the first. Trea Turner went 0 for 3 against Neidert and grounded into two double plays, including the one at the end of fifth. He left with the game tied and the Marlins, after managing just five hits in nine innings, eventually pulled out a 2-1, 10-inning win against the Nationals in Washington.

Miguel Rojas' sacrifice fly drove in catcher Sandy Leon in the top of the 10th inning for what proved to be the winning margin.

As Miami plummets further out of contention and the team’s focus shifts even further to the future, Neidert is in line to potentially get a serious look from the Marlins in the final months of the season, especially with their cache of rookie arms on innings limits and injuries piling up in their starting rotation. His outing Wednesday was one of the most positive signs yet and helped Miami survive the loss of starting pitcher Sandy Alcantara, who was originally slated to start Wednesday before going on the bereavement list Tuesday.

Neidert gave up three hits and three walks in five innings, taming the crowd of 21,058 at Nationals Park throughout. He struck out only two and generated five whiffs, but he located his fastball and got 10 called strikes with it, including a heater on the inside edge of the plate to freeze Bell for the third out in the first inning. Only one Washington player got into scoring position with fewer than two outs against Neidert.

Neidert’s five innings were the most in his career and his 79 pitches were his second most behind only his 2021 debut, when he threw 85 in 4 1/3 innings of a loss to the New York Mets in April. The low strikeout totals aren’t out of the ordinary for Neidert so far, but the three walks in five innings were better than his career average.

Neidert got the call back to the majors on Tuesday once the Marlins knew Alcantara wouldn’t make his regularly scheduled start. He had been there three other times this season — once in April, again in May before injuring his biceps and then once more for a single game July 8, when Miami needed a little extra bullpen help — and results were mixed. The pitcher held the Mets to one run in his first start in April, then gave up three in his next and five in his third. He came back in May and looked good, then was solid out of the bullpen against the Los Angeles Dodgers on July 8, mainly sent back to Triple-A Jacksonville to get regular starts and open the door for relief reinforcements in Miami.

In the last week, a door has opened again for the No. 9 prospect in the organization, according to the MLB.com rankings. Starting pitcher Pablo Lopez landed on the 10-day injured list with a right rotator cuff strain Saturday. Alcantara went on the bereavement list Tuesday. Miami, already with two other starting pitchers on the 60-day IL, was down to only starter left from its projected preseason rotation the pitcher — Trevor Rogers, a 23-year-old rookie and the Marlins’ lone All-Star — is having his innings monitored down the stretch.

For Wednesday, Miami opted to give Neidert another shot, optioning outfielder Monte Harrison back to the Jacksonville Jumbo Shrimp to make room for the right-handed pitcher.

With moving pieces all across the pitching staff, Mattingly hasn’t said how he envisions the rotation moving forward. Neidert, though, has made a compelling case.

LOS ANGELES — Two years after the city of Anaheim agreed to sell the property surrounding Angel Stadium to a company led by Angels owner Arte Moreno, the city could be forced to put that deal on hold and put the land on ...Read More

PHOENIX — This was supposed to be a series where the Pirates could gain some traction, especially coming off a weekend where they won two of three against the Mets. Facing the worst-in-baseball Diamondbacks, the only ...Read More

DENVER — A bullpen start that featured the usage of an opener?

In terms of generating anger, outrage and disgust, those two oft-used baseball strategies seem to unite an often-divided Mariners fan base that usually only...Read More