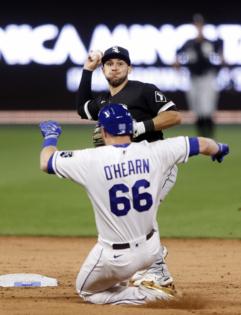 KANSAS CITY, MO. — The Chicago White Sox sent 13 batters to the plate during an eight-run first inning on the way to a 9-1 victory against the Kansas City Royals on Saturday at Kauffman Stadium.

Tim Anderson, Nick Madrigal and Yoán Moncada each had two hits in the inning. Anderson and Madrigal singled twice. Moncada had a two-run double and an RBI single.

Yasmani Grandal had a sacrifice fly, Andrew Vaughn drove in a run with a double and later scored on a triple from Leury García and Danny Mendick followed García with a two-run home run to left.

Royals starter Daniel Lynch allowed eight runs on seven hits in two-thirds of an inning. The Sox had nine hits in the inning.

According to STATS, it was the first time the Sox scored eight runs in the first inning since April 21, 2002, when they scored eight against the Detroit Tigers.

It was the first time the Sox scored at least eight runs in the first inning of a road game since June 18, 2000, when they scored nine against the New York Yankees at Yankee Stadium.

It also was the most runs the Sox have scored in the first inning against the Royals and the first time the Sox had three players record multiple hits in the same inning since Sept. 17, 2007, when Josh Fields, Jerry Owens and Danny Richar accomplished the feat in the fifth inning at Kansas City.

Lance Lynn benefited from the offensive outburst. The right-hander allowed one hit, struck out six and walked four in five scoreless innings as the American League Central-leading Sox (18-13) won for the third time in four games.

Chase Utley was in attendance at Dodger Stadium on Monday night, and the fans rewarded him with a nice cheer when he was shown on the video board.

Frank Vogel, the Lakers’ coach, was at the game too. When he was shown, ...Read More