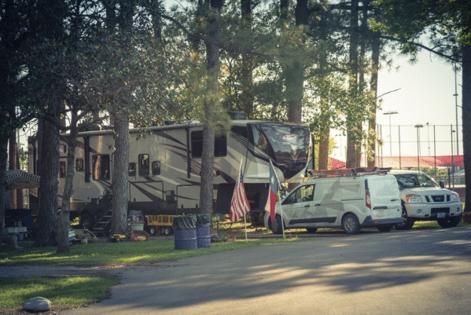 CHARLOTTE, N.C. — Sheletta Brundidge was trying to enjoy a family vacation. The mother of four had packed up their Camping World RV for spring break in early March for the 18-hour trip from their Minnesota home to her native Houston for the city’s Livestock Show and Rodeo.

The event included a “Sensory Friendly Day” that Sheletta said she thought her three youngest children, who were diagnosed with autism spectrum disorders, would enjoy. The carnival’s lights and music were muted for part of that day so individuals with special needs wouldn’t be overstimulated.

During the trip, though, Sheletta noticed that her 9-year-old son, Brandon, who was diagnosed with severe autism at 3 years old, was fixated on something. In the moment, she couldn’t figure out what it was.

“My baby kept saying, ‘Mom, these people love me here!’ ” Sheletta said. “And I was like, ‘What are you talking about?’ ”

“He said, ‘They’ve got my flags all over the place. They’re cheering for me!’ ”

It wasn’t until the family was riding in a golf cart around the RV park the following day that it became clear what Brandon was talking about. He called out to Sheletta and pointed to a flag mounted atop a nearby RV.

“And when I looked up,” Sheletta said. “It was a Let’s Go Brandon flag.”

Origin of a phrase

Sheletta has more than 20 years of experience in news broadcasting and runs a podcast focused on the stories and concerns of the Black community. Given her familiarity with media, and her news consumption habits, she said she was immediately aware that the Let’s Go Brandon flag was not intended for her son.

If you don’t believe me, consider that Miami Dolphins ...Read More