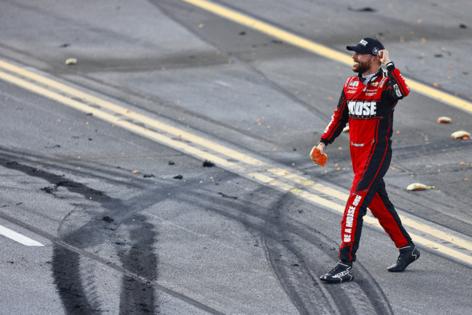 Ross Chastain found his way to the front and was in the lead at the right time, coming to the checkered flag at Talladega. He won NASCAR’s GEICO 500 race, finishing 0.105 seconds ahead of second place finisher Austin Dillon.

Chastain was racing in third behind Erik Jones and Kyle Larson on the final lap, but Larson moved to the outside to try to pass leader Jones as Chastain found space underneath them both.

Jones moved to block Larson, but wiggled after getting clipped. He dropped to a sixth place finish as Chastain zipped to his second victory of the season running three-wide at the flag. He smashed a watermelon from atop his No. 1 Chevrolet, a signature celebration for a win by the melon farmer.

He stayed low and held his line for his second win in the last five races. His first victory with his Trackhouse Racing team came on a road course at Circuit of the Americas. Chastain raced the same chassis on Sunday at the superspeedway that he raced for his earlier COTA victory this year, highlighting the versatility of the Next Gen car.

“In a month you can bring a car back that won on a road course and you can win at Talladega?” Chastain said. “That hasn’t happened since the ‘60s. I don’t know, farther back ... so, it’s wild.”

While it was a boon for Chastain, the finish was a tough blow for Jones, who was so close to winning his first race of the year and first with his Petty GMS team. Jones’ last victory was in 2019.

“I felt pretty good, but that top line was getting momentum,” Jones said. “Looking back, I wish I’d stayed on the bottom. I tried to defend the 5 (Larson). It is what it is, just trying to win the race.”

Larson, the defending Cup champion, also put on a strong performance at a superspeedway track where he said he’s typically struggled.