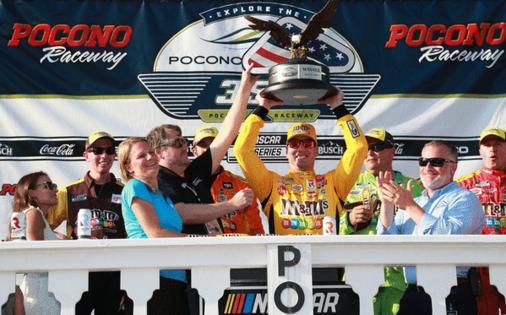 Kyle Busch scored his second win of the season Sunday with his car stuck in fourth gear almost the entire race. The No. 18 driver might not have had a functional clutch at the end of 140 laps, but he had just enough fuel to outpace the field.

The final 20 laps of the Explore the Pocono Mountains 350 race were all about fuel strategy with multiple teams trying to stretch their supply. Busch was sitting in sixth place with the best car on fuel mileage at that point, while William Byron was told to save from second place. It was a question of whether Byron could make it, and if not, who could — Denny Hamlin? Kurt Busch?

Byron assumed the lead with eight laps to go when Brad Keselowski pitted from first. A few laps later, Byron was in the pits and Hamlin was up to first place with just two laps left. Hamlin was eyeing his first win of the season, but again fell short as his fuel dwindled. He headed to pit road while his Joe Gibbs Racing teammate headed into his white flag lap and then across the finish line in first. Kyle Larson finished second.

“Thanks to Matt, the fuel guy, for getting it full. That’s a big important one today. Really great to take home another checkered flag.”

Beshore after the race described how the transmission issue made restarts difficult. The team attempted unsuccessfully to send a crew member into Busch’s car at the end of the second stage to attempt to pry the shifter from high gear. It didn’t work, and the car needed a push from crew members to get back on track. Busch pitted before the final restart and the team added fuel, hoping the race stayed green, while other teams tried to stretch their tank.

The victory for Busch snapped Hendrick Motorsports’ six-win streak after Alex Bowman took the checkered flag at the same track in Long Pond, Pennsylvania on Saturday. Busch finished second in that race. On Sunday, he earned his fourth career win at Pocono and his 59th career win in the Cup Series. While Busch credited his team for the win, Beshore pointed to the driver.

“Any time you go to Pocono with Kyle Busch, you’ve got a shot,” Beshore said. “He’s so good here. His results show it.”

Busch was singing Steve Miller Band lyrics into his radio at one point, despite the early transmission issues, when he took the lead for the first time on Lap 45 as Team Penske drivers Brad Keselowski and Ryan Blaney made their pits stops. “I’m going to fly like an eagle,” Busch sang.

He finished the second stage in the top 10, then made the long pit stop while car chief Nate Bellows climbed in his car to work on the transmission. By the final 10 laps, the driver was given the go-ahead to again fly like an eagle, this time to pass his brother in the top four. Then, one after another, cars in front of Busch fell away, including Hamlin, who finished a disappointing 14th.

Hamlin said he felt like his No. 11 Toyota overall had more speed this weekend than the past few weeks after a fourth place finish Saturday, but his average finish since the race at Circuit of the Americas is 11.3.

Larson recovered from early nose damage running a similar fuel strategy Busch’s team ran Saturday to finish in second place on Sunday — an improvement after the late-race heartbreak the No. 5 team suffered the day prior when a flat tire sent Larson into the wall on the last lap. William Byron won the second stage Sunday and led 22 laps behind Keselowski (31 laps led) and Busch (30).

But Gibbs teams responded to Hendrick cars on Sunday. Martin Truex Jr. won the first stage of the race and finished in the top 10 in Stage 2 (although he ultimately finished 11th). Christopher Bell led three laps and saved his car from a full spin after contact with Ross Chastain quickly followed by contact with Chase Elliott in the final stage. Another Toyota driver, Bubba Wallace, also finished in fifth place for his first top-five for his 23XI Racing team this year.

“Obviously they were better, they were faster this time around,” Busch said of the Hendrick drivers. “But this was a good chance for us to stack up as good as we can be and as good as they are, and see what happened.”