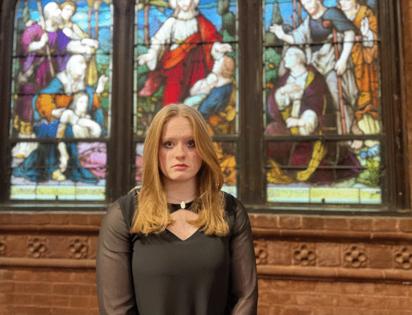 HARTFORD, Conn. — When Jackie Haggerty was just 7 years old, she huddled by her cubby in her second-grade classroom as a gunman tore through neighboring classrooms, killing 20 of her schoolmates and six educators at Sandy Hook Elementary School.

Nearly a decade later, Haggerty stepped in front of hundreds of people gathered at St. Mark’s Episcopal Church in Washington, D.C., on Wednesday evening to share her story of survival ahead of remarks by President Joe Biden, who is slated to join scores of activists, advocates and survivors — many from Connecticut — for the 10th annual National Vigil for All Victims of Gun Violence.

The vigil, hosted by the Newtown-based grassroots organization Newtown Action Alliance, is held in the nation’s capital every December to mark the anniversary of the tragedy and call on Americans to honor the memories of those killed by taking action.

With the 10-year remembrance of the tragedy at Sandy Hook next Wednesday, many young activists like Haggerty are more motivated than ever to be the voice for their classmates and educators who were killed, to remind the country of the horror they survived and to implore lawmakers to pass legislation to prevent other students from facing the same fate as the 26 killed in Newtown and the more than 400,000 Americans killed by guns in the 10 years since.

When she looks back on that morning 10 years ago, Haggerty says she knows how close she came to being another face a memorial in her hometown, another name added to the growing list of gun violence victims.

Even at 7, she said she knew how close she came to dying. She heard the rapid fire of the gunshots that rang out in the classroom behind hers and knew that it all came down to which unlockable classroom door gunman Adam Lanza chose to open.

“If that awful individual had chosen the other side of that hallway, I would not be sitting on this bus,” Haggerty said on Wednesday morning after leaving Newtown at dawn to head to Washington, D.C. “This would be a vigil honoring me.”

Haggerty, a 17-year-old red-haired triplet whose life is filled with equal parts college applications and activism in her senior year at Newtown High School, reminded herself that she continues to tell her story because she can — because she survived that day and she still has a voice.

Looking around the bus hours into the long ride from Newtown, Haggerty said that when she grows weary or overwhelmed by the seemingly never-ending stream of mass shootings and tragedies that echo Newtown’s, her memory winds its way to moments on another bus.