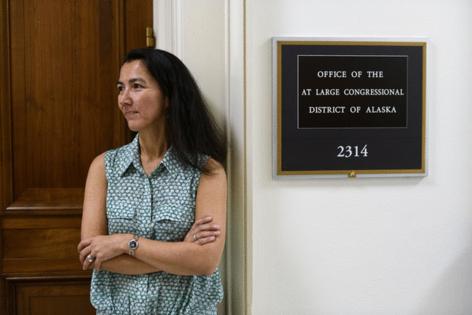 WASHINGTON — As an aide for Rep.-elect Nick LaLota approached the box that held numbered buttons and her office fate in its wooden confines, she pulled out her phone to play Frank Sinatra’s “Luck Be a Lady.”

Lady Luck listened: She drew 20 for the New York Republican, a respectable spot among the 73 available at Friday’s biennial lottery for new House members.

It’s a lighthearted affair and an early indication of which newcomers are natural hams eager to perform in front of their new colleagues as they walk to the front of a packed hearing room to draw lots. The prize? A chance to pick the office space they will call home for the next two years.

Given these were mostly politicians — men and women who asked thousands of strangers for their money and votes to get here — shyness was in short supply.

There were big cheers when Rep.-elect Mike Ezell of Mississippi plucked No. 2 with an early pick, and an empathetic “aww” from the crowd when Rep.-elect Val Hoyle of Oregon drew 53. The groans led Architect of the Capitol Superintendent David Wilder, who presided over the drawing, to quip: “You guys know it goes to 73, right? She’s good.”

Wilder had no bucking up to offer when Rep.-elect Anna Paulina Luna drew 71 a few picks later. “Oh my god, it’s terrible!” the Florida Republican shouted when she saw her number. No one disagreed.

The morning’s most comedic performance came appropriately from Mr. Bean — Rep.-elect Aaron Bean of Florida, that is. He dramatically drew his number without looking, holding it up high above him for the crowd to see before handing it to AOC staff. And after Wilder called out, “Mr. Bean selects 68,” Bean celebrated with fist pumps and high fives.

Members-elect cheered on the new friends they’ve made during their first few visits to the Capitol for freshman orientation, the millennial and Gen Z Democrats in particular. “Let’s go Summer!” They shouted as Pennsylvania’s Rep.-elect Summer Lee nabbed the sixth selection.

There are 74 members of this year’s freshman class, but Rep.-elect Jonathan Jackson of Illinois was a no-show, meaning he defaulted to the last pick. (Members could send aides in their stead, but no one piped up for Jackson during the roll call.) The real work began later Friday morning, with each member-elect choosing an office space from whatever options were left. That happened during designated 5-minute slots, like a slower, less exciting version of the NBA draft being held immediately after the draft pick lottery.

In a break from past lottos’ alphabetical tradition, the representatives-elect pulled their numbers one-by-one in a randomized order. In theory that randomization could have set the order for actually picking offices, but what would be the fun in that?