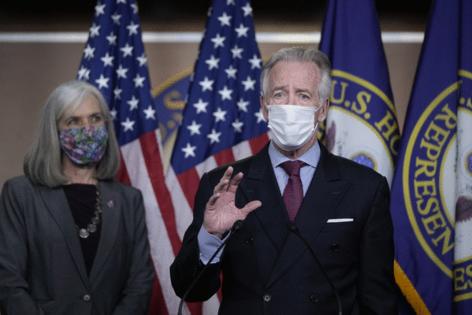 The short answer, Neal said, is there’s not a whole lot he can say — even whether he has seen Trump’s tax returns, now that Treasury is required to turn them over to Ways and Means under Section 6103 of the tax code.

“I have not acknowledged that I have them or don’t have them,” Neal, D-Mass., said. “I’m not going to comment on that.”

Nor would Neal confirm that there would be some sort of executive session for his panel members to review the returns, or any possible decision to make them public at some point. “It’s very sensitive information,” he said. “We intend to deal with it professionally.”

But what’s clear is that Neal, in the short time he has remaining as chairman before a Republican takes the gavel in January, intends to do something regarding the transparency and auditing of presidents’ taxes.

“It merits a response to the Supreme Court finding, for sure. It’s a priority,” Neal said. “I intend to see this through. We’re still in the majority for the next 33 days.”

Neal, a former high school teacher, emphasized that the issue was beyond politics or any attempt to embarrass Trump.

He also hinted at future legislation to compel the release of presidential returns, saying he’s had some “conversations” on that front.

“Every president since Richard Nixon, they’ve offered up their tax forms for review and analysis. And in virtually every case now since the Nixon presidency, it’s been volunteered,” Neal said. “I think it would be fair to say it would be a good idea for presidents down the road to be required to release their tax forms.”