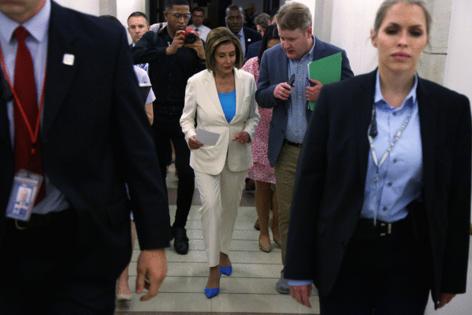 “It’s really something to behold. This is someone who prefers the stairs, and you oftentimes see the (security) detail struggling to keep up,” he said in a November interview.

“I think if I had some Italian genes, I might stand a better chance,” he laughed, a nod to the California Democrat’s heritage.

Hammill, 44, began working for Pelosi in 2006, the year before she became the first woman speaker in history.

Look for the speaker, and more likely than not, you’ll also catch a glimpse of Hammill by her side, a stack of papers in one hand and his cellphone in the other. As her deputy chief of staff since 2015, he’s been her fiercest flack and runs her 17-person communications operation.

Those who hawkishly watch congressional staff shifts may be wondering: What’s the next step for Hammill now that Pelosi’s stepping down as Democratic leader?

“Oh, I have no idea. … I’m focused on getting sleep first, and then I’ll think about that,” he said.

The Illinois native did confirm he has no plans to leave Washington, where he lives in the neighborhood of Capitol Hill with his husband. And if he’s sticking around the seat of government, it’ll be on the House side. “The Senate is just really slow,” he said.

One thing is certain: He won’t stay with Pelosi. Her change in budget from speaker to rank-and-file member, representing San Francisco, will mean a dramatic scaling down of her staff.

“She can’t afford to take all of us with her. … I would follow her anywhere if she had the money to pay for me. But she does not,” Hammill said.