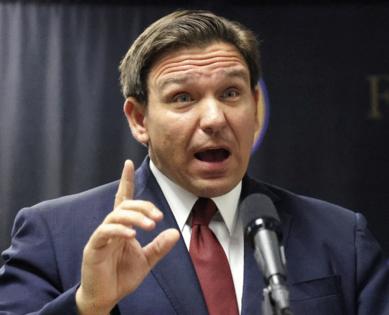 MIAMI — Just four years after Florida’s Legislature made sure politicians would have to resign before running for federal office, they seem poised to change the rules again.

The impetus is Gov. Ron DeSantis, who is widely speculated to be eyeing a presidential run, especially following this year’s landslide reelection victory.

“Candidly, we have gone back and forth based on the circumstances of the moment,” House Speaker Paul Renner said in a statement when asked about his support for changing the rules. “In this case, it’s an honor for someone from Florida to even consider running for President.”

Renner, R-Palm Coast, said he thinks DeSantis “may be able to run now without resigning under current law,” but said the Legislature should “correct any ambiguity” and that the state has been “inconsistent” in the past.

Senate President Kathleen Passidomo, R-Naples, has also said she’d be in favor of making changes to the rules, although neither she nor Renner specified exactly what changes they’d like to see.

It wouldn’t be the first time lawmakers have changed the rules to benefit a candidate they liked. In 2007, the resign-to-run law was tweaked to remove the requirement for federal candidates, as then-Gov. Charlie Crist, a Republican at the time, was being eyed as a running mate for Sen. John McCain’s 2008 presidential bid. Lawmakers in later years continued to tweak the law.

In 2018, lawmakers explicitly outlined the requirement for candidates running for federal office to resign and removed an exception for presidential and vice presidential candidates, saying federal candidates must resign no later than 10 days before qualifying for office. A Senate analysis of the 2018 bill said it would likely reduce the number of special elections.

The law currently says that “any officer who qualifies for federal public office must resign from the office he or she presently holds if the terms, or any part thereof, run concurrently with each other.”

Some lawmakers and lawyers see a pathway for DeSantis to run even with the resign-to-run requirement in place. One interpretation of the law says that a candidate running for federal office doesn’t have to resign as long as they’re not also trying to be reelected to their state post.

DeSantis, who is term-limited, could not run for a third consecutive term as governor.

It’s also unclear how “qualifying” would be defined in a presidential contest, adding to some legal ambiguity, Jon Mills, a University of Florida constitutional law professor, previously told the Times/Herald.

Sen. Travis Hutson, R-Palm Coast, sponsored the 2018 bill. He said he believes the legislation allows for DeSantis to run without having to resign. He said the intent of his legislation was to stop people from “window shopping” or using their current seat to springboard to another, which he said DeSantis is not doing.

Renner and Passidomo both voted in favor of the 2018 bill. Passidomo declined to comment on why she supported the prior bill and what she’d like to see changed.

A spokesperson for the Department of State, which oversees elections, did not return multiple requests for comment.