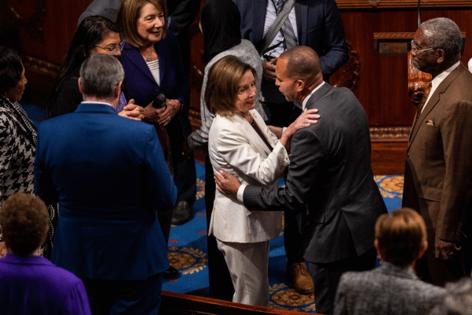 After Wednesday's uncontested vote among House Democrats, much of the nation will start getting to know Hakeem Jeffries as the first Black American to lead a party conference in Congress. Having followed the Brooklynite for decades, we’ve got some insight on, and some advice for, the new House Democratic leader and possible future speaker.

Washington Dems are a fractious bunch. A younger generation pulls the party toward true-blue progressivism even as mainstream party faithful and moderates have other ideas. Since going to Congress in 2013 and joining leadership in 2017, Jeffries has shown a canny rhetorical and substantive ability to straddle the camps.

But if he leans in one direction, it’s toward sound policies that can garner majority support. He’s a longtime friend of charter schools, understanding that they deliver high-quality alternatives to underprivileged families. He’s a stalwart supporter of Israel, even as a vocal contingent of Democrats turns away from America’s most important Mideast ally. He’s a believer in building more housing, including in his backyard.

All this helps explain why there’s no love lost between him and Bronx leftist Alexandria Ocasio-Cortez.

But the same Hakeem Jeffries cheaply portrayed by his intraparty foes as captive to corporate interests has been a powerful voice for racial justice, including by reforming policing and decriminalizing marijuana. The For the People agenda he helped shape takes big swings at getting big money out of politics and combating partisan gerrymandering.

He may not know (Chuck Schumer didn’t until we told him six years ago) that as a member of leadership, Jeffries will make $19,400 more than the standard $174,000 congressional salary. There are only six such lulus in all of Congress, three in each chamber. Albany’s legislature should follow that example.

Jeffries now talks about letting his House caucus operate in a more small-d democratic fashion. Good luck with that. As Nancy Pelosi’s time as captain proved, more often than not, the party must have the smarts to chart a course on choppy seas and the muscle to move the tiller, even as members of the crew might mutter about mutiny.