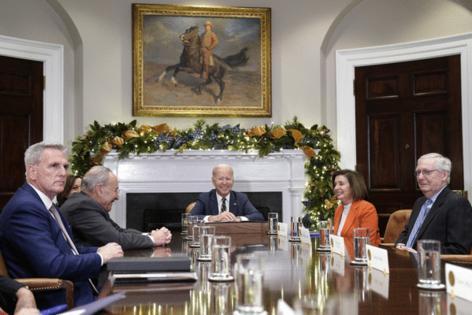 WASHINGTON — Aiming to avert a Dec. 9 railroad work stoppage estimated to cost the economy $2 billion a day, House and Senate leaders of both parties promised to pass legislation soon that would enact the White House’s rail union agreement that is opposed by most rail union workers.

According to House Speaker Nancy Pelosi and Majority Leader Steny Hoyer, the chamber will take up the legislation as soon as 9 a.m. Wednesday. The measure would put in place the most recent tentative agreement by the Presidential Emergency Board in September.

“You need to act a few days before that, because a lot of the suppliers stopped sending their stuff on the trains if they think there’s a possible shutdown,” Schumer said. “For instance, chlorine, to preserve water supplies in many towns and cities, would not go on those trains.”

The legislation comes after Biden called on Capitol Hill to ratify the agreement — a move that’s caused workers to question his self-proclaimed pro-union presidency. The rail unions’ bargaining process and contract has remained in status quo since four unions voted down the agreement over what they called “insufficient” paid sick leave. The other eight unions have ratified the agreement.

Lawmakers were poised to pass a joint resolution in September that would similarly require the unions and railroads to accept the recommendations of the presidential board. However, the Biden administration issued a tentative agreement that includes one of the largest wage packages in nearly five decades, according to advocates of the agreement, as well as health benefits and an additional day of paid time off for most union workers.

According to the Association of American Railroads, the agreement offers one of the highest wage increases in over five decades, with extra wage and compensation of up to $16,000 for the average rail employee.

“Despite making record profits year after year, pumping up their stock prices to unheard-of levels, downsizing the workforce by furloughing 30% of the employees and becoming some of the most profitable corporations on Wall Street, the Class One carriers somehow cannot afford to provide sick time for their hard-working and dedicated employees,” Jason Doering, general secretary of Railroad Workers United, a group representing workers from a variety of rail unions and carriers, said in a statement.

The National Carriers’ Conference Committee, which represents the freight rail carriers in national collective bargaining, maintains that the agreement allows union employees to call in sick “at any time, as long as they maintain a reasonable level of overall availability under carrier attendance policies,” as well as other long-term sickness benefits.