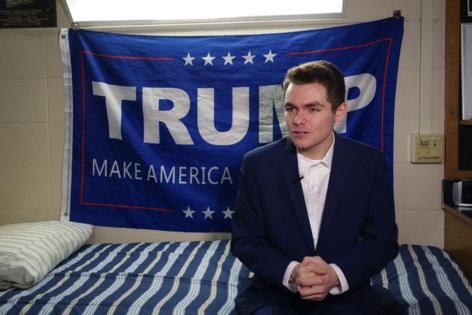 WASHINGTON — Many of Donald Trump’s potential 2024 rivals and some top Republicans have fallen silent on the former president’s dinner with a notorious white supremacist, illustrating the party’s continuing struggle to escape his grasp.

Trump’s impromptu dinner with Nick Fuentes at Mar-a-Lago last week has drawn condemnation from only a handful of Republicans, while most sidestepped the matter or said nothing. Those silent so far include Florida Gov. Ron DeSantis, former Vice President Mike Pence, Senate Minority Leader Mitch McConnell and House Minority Leader Kevin McCarthy, the chamber’s likely next speaker.

Chris Christie, the former New Jersey governor who is rumored to be weighing a 2024 bid, told The New York Times it showed an “awful lack of judgment” by Trump that, when combined with other transgressions, makes him an “untenable general election candidate for the Republican Party in 2024.”

Fuentes, who repeatedly expresses white supremacist and anti-Semitic views, arrived at Mar-a-Lago as guest of Ye, formerly known as Kanye West, who has run afoul of sponsors and social media with anti-Semitic remarks of his own. Trump’s former ambassador to Israel, David Friedman, called Fuentes “human scum” and urged Trump to disavow both men.

Arkansas Gov. Asa Hutchinson, speaking on CNN’s “State of the Union” on Sunday, called it “very troubling” and said Republicans should reject antisemitism.

“I don’t think it’s a good idea for a leader that’s setting an example for the party or the country to meet with an avowed racist or antisemite,” said Hutchinson, another potential 2024 candidate. Rep. James Comer, a Kentucky Republican, told NBC’s “Meet the Press” that Trump “certainly needs better judgment in who he dines with.”

Republican National Committee Chairwoman Ronna McDaniel criticized the meeting without naming Trump. “As I had repeatedly said, white supremacy, neo-Nazism, hate speech and bigotry are disgusting and do not have a home in the Republican Party,” she said in a statement.

Former Secretary of State Mike Pompeo, yet another potential 2024 candidate, condemned antisemitism without saying what prompted his comments. “Anti-Semitism is a cancer,” he tweeted. “We stand with the Jewish people in the fight against the world’s oldest bigotry.”

Trump sought to distance himself from the meeting, saying he didn’t know Ye would bring Fuentes. The former president, who announced his bid for a second term on Nov. 15, still wields tremendous influence over the party, casting uncertainty over Republican efforts to move on.

With the 2024 race still taking shape, DeSantis has avoided direct confrontation with Trump in recent months even when the former president has attacked him head-on. The Florida governor’s office didn’t respond to a request for comment over the weekend, nor did the offices of Pence, McConnell and McCarthy.