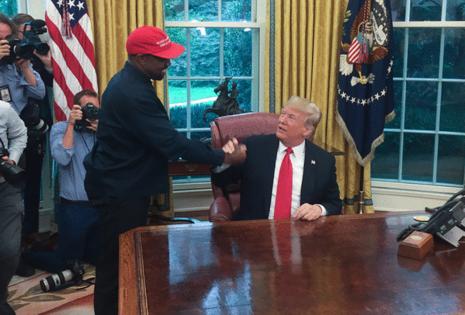 The rapper now known as Ye claims that he told Trump that he wanted him to run as vice president on a Kanye-led White House ticket during a stormy meeting at Mar-a-Lago in Palm Beach, Florida.

“I think the thing that Trump was most perturbed about, me asking him to be my vice president,” Kanye said on a video posted on his newly restored Twitter feed. “That caught him off-guard.”

Trump made it crystal clear that no one except himself was going to have his backing for the top spot in 2024.

“Trump started basically screaming at me at the table telling me I was going to lose,” Kanye continued.

Both West and Trump were recently reinstated to Twitter by the site’s new owner, billionaire Elon Musk.

If West does run in 2024, it could be a test of the two men’s friendship and far-right-wing political alliance of convenience.

The Yeezy impresario launched an ill-fated 2020 bid that was widely seen as an effort to boost Trump by possibly siphoning some votes away from President Joe Biden in a handful of swing states. The campaign flopped when West won just 70,000 votes nationwide.

West’s erratic reputation has only nosedived since then, especially since he has made a string of antisemitic statements claiming that a cabal of Jews control the music business and media.

The rapper has been dumped by Adidas and other top brands and the German sneaker maker is now investigating reports of his alleged inappropriate sexual conduct in the workplace.

Trump officially launched his own 2024 comeback presidential campaign last week, just days after the GOP underperformed in the midterm elections.