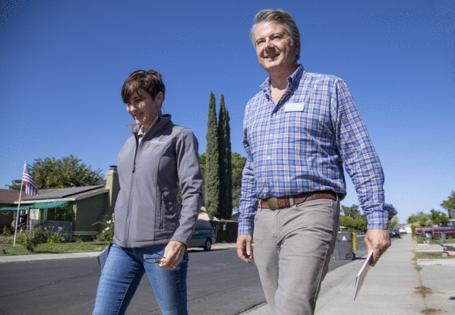 WASHINGTON — In one of the nation’s last uncalled midterm races for the U.S. House of Representatives, a Republican farmer remains slightly ahead of a Democratic Assemblyman.

John Duarte, a Modesto Republican, had 50.2% of the votes with almost 99% of them counted. He had a 593-vote lead on Assemblyman Adam Gray, D-Merced, in California’s 13th Congressional District Wednesday.

Still, it could be a while before a victor is announced.

The 13th, formed through the once-a-decade redrawing of legislative boundaries called redistricting, takes all of Merced County in a stretch from Lathrop past Coalinga. It includes half of Modesto and Turlock. There are more registered Democrats than Republicans, but this purple stretch of Central Valley farmland would have voted to recall Gov. Gavin Newsom by a point last year.

Duarte, 56, operates Duarte Nursery in Hughson. Gray, 45, has represented the area in the Assembly since 2012. Both tout increasing water access in the Valley and helping with affordability issues.

While their priorities are similar, a win for either party could dictate how much cohesion a Republican majority has in the House.

As of Wednesday, Republicans were projected to hold 220 seats. Democrats, 212. There are three uncalled races nationwide.