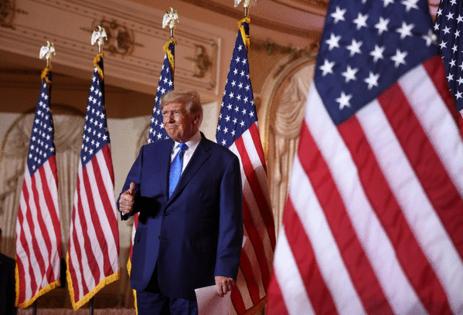 WASHINGTON — The U.S. Supreme Court, which often backed Donald Trump as president, is giving him little deference now that he’s not.

The court’s terse two-sentence order Tuesday, letting a House committee get six years of Trump’s tax returns, marked the fourth time the justices have rejected him over documents since he left office. The cases have produced only a single public dissenting vote from a court that has a 6-3 conservative majority and three Trump appointees.

The latest order gave Democrats a victory after a years-long battle, as the court rejected Trump’s bid to block the Internal Revenue Service from turning over the documents to the House Ways and Means Committee. The IRS is now free to provide the returns and could do so imminently. Democrats haven’t said whether they will make them public.

The decision came barely a month after the justices turned down Trump in his fight over records the FBI seized from his Mar-a-Lago estate.

In February, the justices let a Manhattan prosecutor get Trump’s financial records as part of a criminal investigation of him and his company. And last year the court cleared the way for Trump’s papers to be turned over to the congressional panel investigating the Jan. 6 Capitol attack.

“It would be easy to read some broader repudiation of President Trump into these rulings, but it’s also worth emphasizing just how weak his arguments have been in each of these cases,” said Steve Vladeck, a law professor at the University of Texas at Austin. “Ultimately, the best explanation for why Trump keeps losing in the court is because his claims are losers.”

The Jan. 6 case produced the only public dissent — a vote by Justice Clarence Thomas that became a focus of criticism after revelations about his wife’s role in efforts to overturn the election results.

Trump blasted the court in a Truth Social post, saying it “has lost its honor, prestige, and standing, & has become nothing more than a political body.”

Trump pointed to the court’s refusal to overturn his 2020 election defeat. “Why would anybody be surprised that the Supreme Court has ruled against me, they always do!” Trump wrote.

As president, Trump had a good, though not perfect, record at the Supreme Court. The justices upheld his travel ban, which restricted entry into the US from several heavily Muslim countries, while blocking him from ending a deferred-deportation program. The court issued a mixed decision on subpoenas for his financial records, with one ruling blocking the House from getting access.