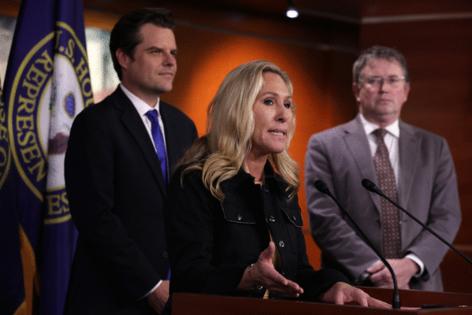 When Vladimir Putin unleashed Russia’s military might on Ukraine in February, House Republican Leader Kevin McCarthy was incensed. Just like the rest of America.

“Vladimir Putin’s invasion of Ukraine is reckless and evil,” McCarthy said on the day of the invasion. “The United States stands with the people of Ukraine and prays for their safety and resolve. Putin’s actions must be met with serious consequence. This act of war is intended to rewrite history and, more concerning, upend the balance of power in Europe. Putin must be held accountable for his actions.”

Those were strong words — the right words.

Recently, however, the California Republican who soon will take over as House speaker expressed a demonstrably different tone when speaking about the continuation of U.S. financial support for Ukraine.

“I think people are gonna be sitting in a recession and they’re not going to write a blank check to Ukraine,” McCarthy told Punchbowl News in October. “They just won’t do it … It’s not a free blank check.”

Why the marked shift? That’s easy to discern.

With the likelihood that the GOP would assume control of the House, even if by a slim majority, the party’s leadership understood that there would be ultraconservatives in the chamber questioning the need to buoy Ukraine, particularly with nonmilitary financial backing.

Donald Trump loyalist Marjorie Taylor Greene, the far-right representative from Georgia, recently told Trump fans in Iowa that “under Republicans, not another penny will go to Ukraine.” And Ohio Republican J.D. Vance, who was just elected to the Senate, said during the campaign that Congress must “stop the money spigot to Ukraine eventually.”

Even progressive Democrats are showing symptoms of Ukraine fatigue. The leader of the Progressive Caucus, Rep. Pramila Jayapal, D-Wash., released a letter in October signed by 30 Democratic lawmakers that urged the Biden administration to begin pursuing a diplomatic resolution with Russia to end the war in Ukraine.

“But as legislators responsible for the expenditure of tens of billions of U.S. taxpayer dollars in military assistance in the conflict,” the ill-considered letter stated, “we believe such involvement in this war also creates a responsibility for the United States to seriously explore all possible avenues, including direct engagement with Russia, to reduce harm and support Ukraine in achieving a peaceful settlement.”

LOS ANGELES — A Los Angeles County deputy district attorney has been placed on administrative leave for his role in the questionable prosecution of a Michigan software executive that may have been sparked by conspiracy ...Read More

Rep. Donald McEachin, a Richmond Democrat who represented Virginia’s 4th Congressional District, died Monday of the secondary effects of colorectal cancer, according to a statement released by his office. He was 61.

LANSING, Mich. — The Michigan Board of State Canvassers voted unanimously Monday to certify the results of the state’s Nov. 8 general election during an at-capacity, hours-long meeting in which two audience members ...Read More