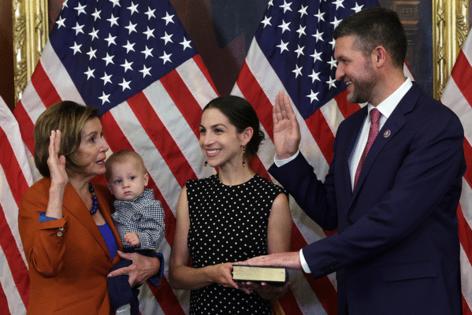 NEW YORK — In New York’s competitive contest for the House of Representatives, only one Democrat managed to break through the Republican wave that washed over the state this election cycle.

That Democrat was Rep. Pat Ryan, an Army combat veteran who squeaked out a victory against Republican Assemblyman Colin Schmitt.

Now, as Democrats conduct a torturous post-mortem of their poor showing in New York state — a showing made even more painful when compared to the expectation-defying results they had in much of the rest of the country — political observers are turning to the 18th Congressional District to understand why Ryan won while other Democrats weren’t so fortunate.

Ryan, the former Ulster County executive, had a few things going for him.

Although the redistricting process confounded many Democrats, he may have benefited from it. In August, he won a special election to replace former Rep. Antonio Delgado, who vacated the seat to take a job as lieutenant governor. That was in the 19th Congressional District.

Redistricting, which comes every 10 years after each national census, put parts of what was the 19th District, like the city of Kingston, into the 18th — and that was where Ryan ultimately decided to run.

For Ryan, this meant two congressional runs in quick succession, which kept his name front and center for people casting ballots who were already familiar with him.

“Voters knew him. They voted for him before, and they liked him,” said longtime Democratic strategist Hank Sheinkopf.

Like every Democrat in New York state, Ryan had to counter a Republican-driven narrative that Democratic control had led to upticks in crime — even though Republican-led areas have also witnessed similar spikes in crime. Despite that, many Democrats in New York were still caught off guard.

Ryan was not. His status as a graduate of West Point and an Army veteran lent him credibility when it came to public safety — as did his record as Ulster county executive.