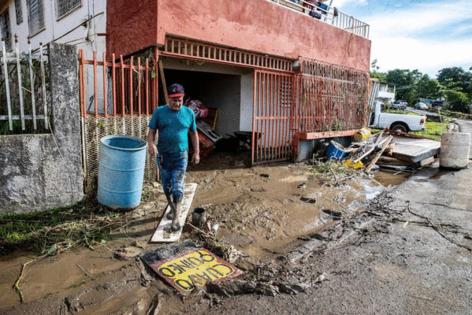 Biden is expected to announce more than $60 million in aid to Puerto Rico to create a new flood warning system and fortify flood walls and levees, according to a White House official. He will also meet residents and prepare bags filled with food and relief during the presidential visit, in which Federal Emergency Management Agency head Deanne Criswell will participate.

The Bidens are slated to land at the Mercedita International Airport in the city of Ponce, the site of previous presidential visits and the largest city in the island’s southern region, which experienced a series of devastating earthquakes two years ago and was hard hit by Fiona’s floods last month.

Fiona, a Category 1 Fiona when it hit the island, dumped torrential rainfall across Puerto Rico and as much as 25 inches of rain in some parts of the interior and southeast. It also caused landslides that cut off communities and roads, knocked out the island’s electric system and left millions without water and power. Rivers across the island experienced major flooding, inundating nearby communities. In the town of Salinas alone, where the mayor’s assistant said some 3,000 houses suffered damages, over 400 rescues took place.

As of Sunday evening, private power utility operator LUMA energy said 92% of its nearly 1.5 million clients had electricity again. However, power restoration has been slower in the hard hit Ponce and Mayagüez regions. The company said it estimated to restore power to 90% of clients in those areas between Tuesday and Thursday.

Residents in some communities told the Miami Herald they experienced worse flooding during Fiona than during 2017 Hurricane Maria, which killed thousands, devastated critical infrastructure, created $90 billion in damages, and left some residents without power for a year.

Fiona is the latest setback to the recovery of Puerto Rico, which is still reeling from recent earthquakes and storms as it manages the COVID-19 pandemic, steep population decline and a recent exit from a years-long bankruptcy.

Biden has publicly positioned himself as an advocate for the island, which has seen hundreds of thousands of its residents move to the U.S. mainland in the past decade. While on the campaign trail, he unveiled a Puerto Rico recovery plan, which included revamping the island’s power grid and improving education and healthcare in Puerto Rico. He also visited Central Florida, the heart of the Puerto Rican community in the state.

During Biden’s first months in office, his administration announced and released billions of dollars in housing, disaster recovery, and education funds for Puerto Rico and set up a White House task force dedicated to the island.