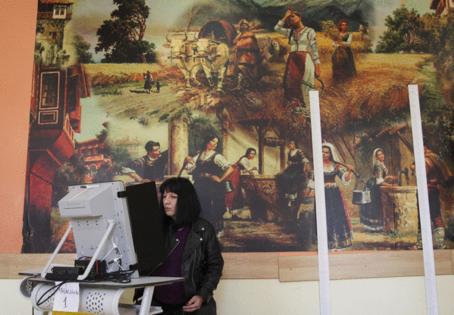 Bulgaria’s former Prime Minister Boyko Borissov appeared on track to take first place in a parliamentary election, though a fragmented party landscape meant the nation may be headed for an extended period of political paralysis.

In the fourth election in less than two years, Borissov’s conservative party won 25% of the vote, according to projections based on early figures published by Alpha Research on Sunday. The party of former Prime Minister Kiril Petkov, whose reformist government lasted only seven months before being toppled in June, came second with 19%. Official results will come in through the evening.

“We want to respect the people’s choice,” Petkov told reporters late Sunday, conceding defeat and saying that Borissov had a free hand to form a government.

But Borissov’s political isolation means that he also has no clear path to cobble together a majority. A prolonged period of coalition building — and even the prospect of a fifth election — could hobble Bulgaria’s ability to address record inflation, a euro adoption plan and the fallout from Russia’s invasion of Ukraine.

Bulgarian voters “expect compromises to be made — they want a government to be formed,” Boryana Dimitrova, a managing partner for Alpha Research, told public broadcaster BNT. “It won’t be easy.”

The European Union’s poorest member state has been propelled into its gravest crisis in decades after Russia, an erstwhile ally, cut off gas supplies in April. Almost completely reliant on the Kremlin’s energy imports before the conflict, the squeeze has left leaders in the nation of 6.5 million scrambling for new resources.

In the absence of an elected government, the void so far has been filled by an interim Cabinet appointed by President Rumen Radev, a retired general who has fended off accusations of softening the country’s stance on Moscow.

While Petkov sought to force a hard turn away from Russia, Radev’s caretaker government has moved to revive talks with Russian state-owned Gazprom PJSC to resume supplies.

The head of state was critical of EU sanctions imposed after the Kremlin’s 2014 seizure of Crimea, which he at one point signaled belonged to Russia. In an address last week, Radev condemned President Vladimir Putin’s aggression, but also warned that the EU should mitigate the risks of its own sanctions against Kremlin.

“It’s becoming harder and harder to form a government,” Radev told reporters in Sofia earlier on Sunday after he cast his vote. “Our country needs strong and legitimate institutions to overcome the crises, to undertake decisive reforms and to take strategic decisions with a long-term horizon.”

Borissov’s Gerb dominated the nation for more than a decade before losing power last year to Petkov’s party, known as We Continue the Change. Backed by mass anti-corruption protests targeting Borissov, Petkov defeated the conservatives on a pledge to tackle corruption. That support has waned, though Borissov’s political isolation gives him few options.

A party traditionally representing Bulgaria’s ethnic Turks, the Movement for Rights and Freedoms, came third with 15%, the exit polls showed, while Revival, an ultranationalist party, won 10% — worse than expected. The pro-Russian Socialists had the backing of 9%.

Party leaders will have three chances to form a majority. If that fails, the president will be forced to call a new vote.