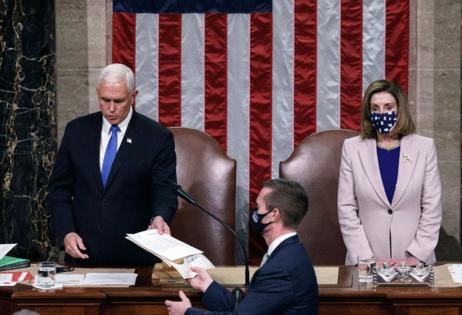 The U.S. House of Representatives last week passed a bill to reform how Congress certifies electors after a presidential election. That bill (or a similar but slightly weaker Senate one) needs to pass the Senate now.

After the November general election, Congress' focus will turn to the 2024 presidential race. Good luck getting any meaningful election reforms passed then.

Ostensibly, the Presidential Election Reform Act is a response to the Jan. 6 riot at the Capitol and its aftermath. When Congress reconvened, 147 Republican representatives and senators voted against certifying that President Joe Biden had won. There also were desperate machinations to convince then-Vice President Mike Pence to throw out the election result.

Jan. 6 is only the impetus of the hour, though. The need for reform has been clear for decades. It just took a near-complete collapse of the process and democratic-norms to prompt action.

The problem goes back to the 1887 law known as the Electoral Count Act. Historians, lawyers and Constitutional law scholars for decades have argued that it was so poorly written, vague and ambiguous that it was only a matter of time until some lawmakers tried to abuse it.

Indeed, Republicans in 2021 weren't the first to object to certifying presidential electors, though they took it further than anyone before. Some Democrats objected to certifying electors in 2001, 2005 and 2017 when Republicans won the White House. The difference was that those were just protests after a candidate had already conceded, not an outright attempt to overturn a fair election.

The House bill would clean up the Electoral Count Act. It would raise the bar for members of Congress to object to certification and would make it explicit that the vice president's role is strictly ceremonial. It also would establish clear rules for who in the states certifies electors.

None of this should be controversial. Establishing well-defined ground rules for elections and the transfer of presidential power benefits everyone. Yet only nine Republicans in the House joined Democrats in passing the bill. Most of the nine also had voted to impeach Trump after Jan. 6 and won't return to Congress after this year's election. They include Washington's Rep. Jaime Herrera Beutler, who lost to a Democrat and a Trump-backed challenger in the top-two primary.

Disappointingly, Washington Rep. Dan Newhouse, who often portrays himself as a moderate and supported impeachment, voted against the reform bill.

The Senate should act without delay, though whether it can overcome a Republican filibuster is uncertain. If it cannot, senators should vote on a similar Senate bill that does have bipartisan support. That one doesn't go quite as far, but something is better than nothing. The alternative is heading into 2024 with the same broken law that led to a riot and members of Congress trading their honor for fealty to a losing presidential candidate.