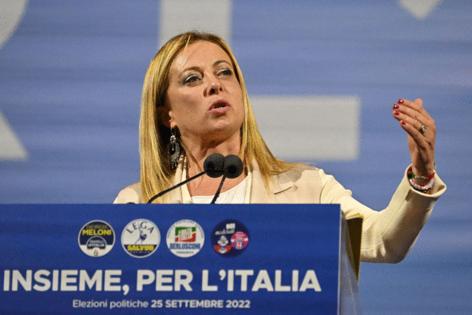 FLORENCE, Italy — Giorgia Meloni has been called a fascist, an extremist and — to an extent — a de facto heir to 20th century dictator Benito Mussolini.

She also seems well on her way to becoming Italy’s next prime minister, favored by many voters weary of the country’s fractious politics and resigned to trying someone new. New, and highly controversial.

Italy, which has seen seven governments in 11 years, holds parliamentary elections on Sunday. Meloni’s Brothers of Italy party has been leading preelection polls. If it prevails, she would become the nation’s first female prime minister — and first far-right leader since Mussolini.

Her anticipated victory highlights Italy’s conflicted relationship with its fascist past. Many voters interviewed here at a recent fundraising dinner for Meloni indicated their support for her was not ideological but the product of general frustration with national politics.

The trend is seen across Europe. This month in Sweden, the ultraconservative Sweden Democrats party took a surprising 20% of the vote. In France, Marine Le Pen, a second-generation right-winger and perennial presidential candidate, has seen support increase with every new election. Hungary’s Viktor Orban — who openly advocates an “illiberal democracy” as he shuts down university programs and civil-society organizations — recently decried the “mixing of races.” The prime minister’s words and deeds recently prompted the European Parliament to declare in a vote that “Hungary can no longer be considered a full democracy,” but “an electoral autocracy” in which basic democratic norms aren’t observed.

The European Union treaty states member nations must uphold certain values that include “respect for human dignity, freedom, democracy, equality, the rule of law, and respect for human rights, including the rights of persons belonging to minorities.” Far-right politicians and their supporters often hold views that are contrary to those values, particularly when it comes to immigrants and LGBTQ individuals.

Traditional democracy is taking hits, from Europe to Asia to the United States, where rogue politicians are whittling away at trust in a democratic system.

These trends are fueled, analysts say, by anti-immigrant sentiment, disaffection with traditional politics and general unhappiness with the economy and prospects for the future. In countries such as Italy, there is an easy reach back to a fascist past for historical foundation.

Meloni, 45, has won backing with her hard-line anti-immigrant positions, a trend in several right-wing political parties making gains in parts of Europe, which has seen the arrival of hundreds of thousands of people fleeing Syria and elsewhere. She was roundly criticized for using in her campaign a video of an immigrant purportedly raping a woman in an Italian city.

Promoting what she calls traditional Christian values, Meloni opposes abortion and same-sex marriage and parenting. “Yes to the natural family!” she declares at rallies.