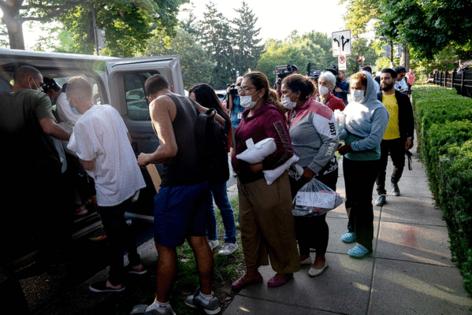 Partisan division over U.S.-Mexico border security threatens to tank a Democratic effort this month to ramp up federal grant funds to help migrants who recently crossed the border, including those whom Republican-led states have bused and flown across the country.

Both the White House and Senate Democratic leadership hope to include language in an upcoming stopgap funding measure to boost assistance for local nonprofits that help asylum-seekers.

The push represents Washington’s response to Republican governors who, in order to voice opposition to the Biden administration’s border policies, have sent migrants to areas they perceive as politically liberal — such as Chicago, New York City and Martha’s Vineyard, Massachusetts. — in an apparent stunt that has local governments asking for help.

Those actions have prompted public outcry, litigation and threats of criminal probes — and now behind-the-scenes negotiations on whether funding will be included in the spending bill that must be passed before the end of the month to avoid a government shutdown.

Connecticut Democratic Sen. Christopher S. Murphy, who chairs the Senate Appropriations Committee’s Homeland Security panel, said in a brief interview Wednesday that the local programs to help migrants “are going to shut down, they’re going to run out of money.”

The grant program, known as the emergency food and shelter program, provides funds to local nonprofits and social services combating homelessness. In fiscal 2022, Congress allocated $150 million toward this fund, part of the Federal Emergency Management Agency, to support organizations helping migrants released after crossing the border.

“It’s hard to imagine the consequences of not increasing the humanitarian assistance line item,” Murphy said.

But the request to bolster the program, one of a number of requests in the stopgap spending bill ahead of midterm elections in November, could fall prey to political outrage over border security that has kept Capitol Hill gridlocked on even more narrow immigration measures.

U.S. Customs and Border Protection announced earlier this week that it has already logged more than 2.1 million encounters with migrants at the southwest border this fiscal year, marking the busiest year at the border in recent history and prompting outcry from congressional Republicans.